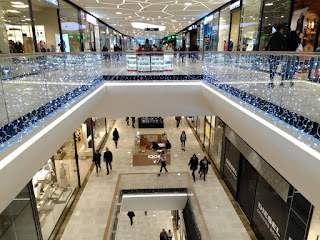 The stuff humans consume, like food, gadgets, toys and accessories, is responsible for up to 60 percent of global greenhouse gases (GHGs), and around 50 to 80 percent of total land, material, and water use. Between 60 to 80 percent of the impacts on the planet come from household consumption.(476)

However, human shoe sizes are not identical, and it is the same with ecological footprints. Consumerism is much higher in developed countries than in poor countries. Those with the highest rates of consumerism have up to 5.5 times the environmental impact as the world average. The US have the highest per capita emissions with 18.6 tonnes CO2e. Luxembourg had 18.5 tonnes, and Australia came in third with 17.7 tonnes. The world average, for comparison, was 3.4 tonnes, and China had just 1.8 tonnes.

Lifestyle and consumption impacts are highly unequal within and between countries. For example, the carbon footprints of citizens in G20 developing countries like Brazil and India are far lower than those of their counterparts in the rich OECD nations like Germany and the UK. On top of that, there are significant differences in the consumption effects caused by rich and poor citizens in developed countries like the USA.

Overall, the world's rich are largely responsible for causing climate chaos. Moreover, climate warming is inextricably linked to economic inequality. A natural disaster crisis driven by climate-altering gases generated by the ‘haves,’ is affecting the ‘have-nots’ the hardest.

While the total climate-altering gases produced in China divided on a per capita basis have now surpassed those of the European Union, the per capita lifestyle consumption footprint of the wealthiest 10 percent of Chinese citizens are considerably lower than the richest of their OECD counterparts. This is because a large share of China’s emissions is from the production of goods consumed in developed countries. The poorest half of the Chinese population, over 600m people, have a total GHG footprint that is one-third that of the wealthiest 10 percent of US citizens, around 30m people.

The richest citizens in the Global North and Global South can and should cut their GHG footprints through lifestyle modifications. Still and all, they cannot solve the climate crisis alone. Effectual solutions require reduced footprints from the vast majority of citizens in the Global North, who are distinctly part of the over-consumption problem.

One author, Oppenlander, argues, “Our civilization displays a curious instinct when confronted with a problem related to overconsumption - we simply find a way to produce more of what it is we are consuming, instead of limiting or stopping that consumption.”(478) This is certainly true for food animals, due to the combined efforts of governments, non-governmental organizations (NGOs) like the UN Food and Agricultural Organization (FAO), and transnational corporations (TFCs).

For decades, the consumption of goods and services has risen steadily in industrial nations, by virtually any measure: (i) amount of household expenditures, (ii) number of consumers, or (iii) by extraction of raw materials. And, consumption is growing rapidly in many developing countries as well.

An emerging body of research is examining environmentally significant consumption, a broad term used to encompass consumption practices that have particularly serious environmental consequences. Stern notes that “(consumption) is not solely a social or economic activity but a human-environment transaction. Its causes are largely economic and social, at least in advanced societies, but its effects are biophysical.”(479)

Consumption is the result of social, economic, technological, political, and psychological forces. Global, private consumption expenditures - the total spent on goods and services at the household level - topped $20 trillion in 2000, a four-fold spread over 1960 (in 1995 dollars).(480)

There are in excess of 1.7 billion members of 'the consumer class' and nearly half of them are in the developing world. An over-consumption lifestyle and culture that became common in Europe, North America, Japan, and a few other pockets of the world in the 20th century, is going global in the 21st century.

As of 2003, the US had a larger number of private cars than licensed drivers, and gas-guzzling sport utility trucks were among the best-selling vehicles. New houses in the US were 38 percent bigger in 2002 than in 1975, despite having fewer people per household on average.

China and India make up 20 percent of the global consumer class, with a combined population of 362 million. Notably, this Asian middle class is bigger than all of Western Europe. All the same, the average Chinese or Indian member consumes substantially less than the average European.

China and India’s large consumer class constitutes only 16 percent of the region’s population, whereas, in Europe the figure is 89 percent. This suggests that there is considerable room for growth in the developing world, and a vast opportunity to reduce over-consumption in Europe and the Global North.