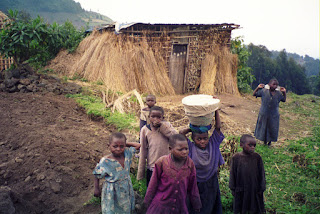 One main aspect of over-consumption is the substitution of animal-base foods for plant-based foods as income and wealth swells. Food animal over-consumption is a increasing problem among the world's growing middle class. For example, there are over 300 million obese adults worldwide, up from 200 million in 1995.

Consumption habits have various environmental impacts, particularly on land. The planet has only 1.9 hectares (4.6 acres) of biologically productive land per person to supply resources and absorb wastes. In spite of that, the average person on Earth already uses 2.3 hectares (5.6 acres) worth. People's ecological footprints range from the 9.7 hectares (24 acres) claimed by the average American, to the 0.47 hectares (1.1 acre) used by the average Mozambican.(481)

According to the UN Food and Agriculture Organization (FAO), noteworthy improvements have been made in food consumption per person. During three decades, between 1969/1971 and 1999/2001, there has been an increase of almost 400 kcal per person, per day from 2,411 to 2,789 kcal, globally. All the same, at the lower end of the development spectrum, the poor regions of Sub-Saharan Africa saw only modest gains in their prevailing low levels of available food, while Middle Africa experienced a pronounced drop-off.

Despite the 16.5 percent addition to per person global caloric intake, some developing countries have declined further from what was already a very low per capita food consumption level. This was especially so in sub-Saharan Africa, in particular, Somalia, Burundi, Rwanda and Kenya.(482)

In terms of calories from major food commodities, there are monumental differences between developing and industrial countries. Between 1963 and 2003, developing countries had immense upsurges in the consumption of calories from animal-based foods (119%), sugar (127%) and vegetable oils (199%). China showed even bigger hikes in this 40 year period, especially in vegetable oils (680%), animal products (349%) and sugar (305%).

There has been a 62 percent spike in food animal consumption worldwide, with the biggest growth in the developing countries which had an average three-fold increase since 1963. China had a dramatic nine-fold ramp-up and Eastern Asia had a five-fold expansion in the supply of animal food calories per capita.

In industrial countries, over the same four decades, vegetable oil consumption rose appreciably (105%). Animal-based products such as pig sausages, cow burgers, pig pies, etc., account for almost half of all carcass consumed in developed countries. In the US, over half of the energy intake, 58 percent of food consumed, comes from ultra-processed foods such as sodas, and milk-based drinks; cakes, cookies and pies; salty snacks; frozen and shelf-stable plates; pizza and breakfast cereals.(483)

In both developing and industrial countries, there were declines for pulses, roots, and tubers between 1963 and 2003. This is part of the ‘substitution’ effect, a shift in the consumption of foodstuffs with no major variation in the overall energy supply. This shift is primarily from carbohydrate-rich staples like cereals, roots, and tubers, to vegetable oils, animal products, and sugar.

While production of fruits and vegetables has been expanding over recent years, inadequate consumption remains a problem worldwide. States need to help to make fruits and vegetables accessible and affordable to a larger extent for poor households as well as ensure access to markets by smaller producers.