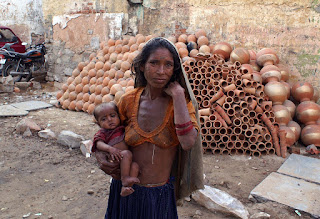 Global food insecurity is a problem of distribution, not just production. The poor eat less across the world, and there is more poor in the Global South. Around 17 percent of densely populated India is undernourished, even though per capita flesh consumption is relatively low. In contrast, fewer than five percent of people in the US, where 22 percent of the world’s cattle is raised, are at risk of going hungry.(486)

Overall, the clear trend globally is increasing food animal consumption among the urban middle class. Eating animal-based meals is a status symbol. Even with India's religious prohibitions against the eating of cow flesh, 'non-veg' has become a status symbol in the thriving cities. On top of this, across the world, people typically eat food animals as part of a feast, holiday or celebration.

School cafeterias in the Global North serve animal flesh every day, with few plant-based offerings. This raises expectations in children for a daily dose of animal protein. Even though plants are cheaper, a high-pressure, fast food lifestyle is causing adults to lose their taste for vegetables, and they are forgetting how to cook them. Poor adults have to use more of their scarce money for food.

Brazil, Russia, India, China and South Africa, the BRICS, are five big developing countries. Economic growth in the BRICS is reflected in their animal consumption, and together, they account for 40 percent of the world’s population. Between 2003 and 2012, BRICS animal consumption rose by 6.3 percent a year and is expected to rise by another 2.5 percent a year between 2013 and 2022.

Increase in food animals consumption affects different species. The global upsurge in carnism is mainly due to the expansion in poultry consumption. On a worldwide level, there was no gain in consumption levels of cow flesh from 1970-2000. This trend reflects the fact that while cattle consumption rose in developing countries such as China and Brazil, it fell modestly in North America, Oceania, and Europe.

Chicken consumption in China and India is determined by class and lifestyle to a larger extent, than by population growth. Similarly, in Russia, the world’s biggest cow carcass importer, demand depends on prosperity from oil and gas export revenues, since the population peaked in 1991, at around 150 million. While animal carcass is cheap in Brazil, it is expensive in South Africa. Several economic crises in South Africa have ensured that the rising demand for animal flesh is almost entirely limited to cheaper chicken carcass.

The world face increasing demand for food. Between 2005 and 2050, food demand may soar 59 to 98 percent higher than the UN Food and Agriculture Organization (FAO) estimate of 54 percent, from the 2005/2007 levels. There are many uncertainties, but food projections are more sensitive to socio-economic assumptions, than to climate warming or bioenergy scenarios.(487) The global middle-class is the key driver of food demand.

The FAO range in food estimates is wide, in particular for consumption of animal calories - between 61 percent and 144 percent. This is due to differences in specifications, income, and price. With higher population and lower economic growth, consumption per capita drops on average by 9 percent for crops and 18 percent for livestock. This shows that a consumption tax on food animals can greatly lower climate-altering gases.