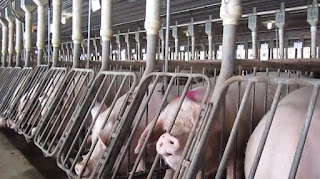 There is a “triangle of industrial animal agriculture” that connects the world’s biggest players in the food animal and feed industries: the US, China, and Brazil. The three nations form three points of a triangle, with the US serving as a major exporter of mature, industrialized, livestock production chains.(514)

The US is one of the world’s top cow flesh producer and the second largest pig flesh producer, comprising 18.6 percent and 9.4 percent of world production, respectively.(515) Between 2002 and 2012, the number of animals on the biggest US factory farms swelled by 20 percent. Both US livestock exports and domestic consumption are projected to grow throughout the next decade.(516)

China is a rapidly growing economy with a huge appetite for livestock products and a major market for US production. China became the world’s largest importer of soybeans, used for livestock feed, in 2000, and the top animal carcass producer in 2009.(517) The rapid expansion of intensive animal farming facilities is part of an effort to catch up with the livestock production model now standard in industrialized countries. In 2014, China produced 56.7 million metric tons of pig and 6.9 million metric tons of cow flesh, representing 51.3 percent and 11.5 percent of world production, respectively.

Despite this, with restricted natural resources domestically, especially water, to meet the demand for livestock, China is heavily importing food animal carcass and live animals from other countries as well. Together, China and Hong Kong in 2014 were the top importers of cow and pig flesh. During the first half of 2013, Hong Kong became the largest export market for Brazilian food animal carcass.(518)

Brazil is the world’s largest chicken flesh and soybean trader, the second largest cow carcass exporter, and the fourth largest pig flesh dealer. Brazil is a country with intensifying conflicts between the economic returns of spreading livestock- and feed-centered agricultural production and the need to protect some of Earth’s most ecologically critical ecosystems.

Currently, upwards of 40 percent of Brazil’s soybean harvest is crushed domestically to create soybean meal, half of which is used in the country as food animal feed. Most of the rest are exported. A large percentage of the products of intensive agriculture in Brazil, like pig carcass, chicken flesh, and food animal feed, is exported. In contrast, China only exports a small fraction of these products.

Turning farms into factories has helped the US achieve huge agricultural yields, producing at low cost and high “efficiency” with regard to time, if not energy or environmental efficiencies. As the small players drop out or merge with the big players through vertical or horizontal integration, concentration in the food animal industry is exacerbated. As with energy, transport, communications, health and other vital sectors, the food system is increasingly controlled by fewer, larger transnational food corporations (TFCs).

With broadening market strength and dominance, food integrators are able to influence policy-making and policy implementation in favor of their bottom lines. Subsidies are a key case in point. In 2012, US government subsidies for livestock, soybeans, and corn were US$ 58.7 million, $1.5 billion and $2.7 billion, respectively.(519)

The US model of integration easily found a place in Brazil and has thrived there. Although the export of this model to China has encountered some obstacles, construction of large facilities by national and international agribusinesses is mounting with government policy support.

But this triangle of industrial animal agriculture is not sustainable, and is self-destructive for humans. The externalized costs of factory farming will put progressively heavier burdens on consumers, producers, and even on those who choose not to produce or consume factory farmed products or any food animal products at all.