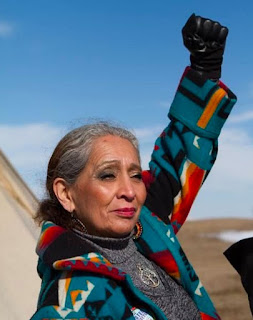 In the Anglo-sphere, fake news of 'white' genocide is used to erase the actual genocide of Indigenous peoples in the US, Canada, Australia and elsewhere. Meanwhile, oil oligarchs in Russia and Europe continue to colonize and exploit Indigenous lands for profit in the Global North and across the Global South. The vast majority of Native people affected by dispossession and pollution are women and children, so First Nations' land rights is a feminist issue.

As the Anglo-sphere becomes increasingly racist against high-melanin migrants from the Global South, it is worth remembering that most people with low-melanin are themselves migrants, colonizers and occupiers of First Nations gynocentric lands on Turtle Island and traditions in the Global South.

Many mainstream Western feminists are reluctant to prioritize issues that are urgent crises in Indigenous communities. For example, the epidemic of missing and murdered Indigenous women and girls, the forced sterilization of Native women, the struggle for land rights, drug and alcohol addiction, and partner violence. There is a lack of awareness of the disproportionate sexual victimization of Indigenous women, specifically as targets of European American and Canadian men.i In addition, there is little attention given to the capitalist ecocide being practiced in First Nations' environments by fossil fuel and other industries, like tar sands pollution, spills from oil pipelines and mining ponds, deforestation, and so on.

Despite 500 years of colonization, Western colonization and fossil fuel hegemony on Turtle Island are not complete. First Nations women and girls have resisted decades of carbon pollution, and there are millions of high-melanin female survivors of centuries of Anglo-spheric genocide. Indigenous women have solutions to both Western consumption-driven ecocide and Eurocentric genocidal racism. First Nations females who are resisting the 6th mass-extinction through peaceful methods of gynocentrism are powerful role models, and one example, is LaDonna Bravebull Allard.

LaDonna Bravebull Allard (1955 to 2021) was an outstanding Lakota-Dakota activist, native historian, and leader of protests against the Dakota Access Pipeline, known by the hashtag #NoDAPL. LaDonna Bravebull was an enrolled member of, and former historical preservation officer for, the Standing Rock Sioux Tribe. The Standing Rock Reservation, located in North Dakota and South Dakota, is the sixth-largest Indigenous reservation in the US.

Brave Bull Allard is the great-great-granddaughter of Nape Hote Win (Mary Big Moccasin), a survivor of the Whitestone Massacre. Sista LaDonna graduated from the University of North Dakota with a degree in History. She later became instrumental in establishing the Standing Rock Scenic Byway which passes many historic sites including the place where Sitting Bull was killed.

In an interview, the female First Nations leader states,

… my family has been here since 1873, when we were brought across from the east side of the river. My name is LaDonna Brave Bull Allard. My real name is Ta Maka Waste Win, Her Good Earth Woman. I am Ihunktonwan, Hunkpatina and Pabaska Dakota on my father’s side. I am Hunkpapa, Sihasapa and Oglala Lakota on my mother’s side. So, I’m Lakota-Dakota, but I was raised Dakota.ii

The upper Missouri River is the only water supply for Standing Rock, and after a proposed route near the state capital was denied, the privately owned Dakota Access Pipeline (DAPL) was rerouted near the Reservation. The Sioux opposed construction of the pipeline under Lake Oahe and the Missouri River, and a grassroots movement began in 2016 to protect the water, land, and sites sacred to the First Nations people.

On April 1st, 2016, Sista LaDonna and her grandchildren founded the Sacred Stone Camp on her land, which was the first resistance gathering of the #NoDAPL movement, with some of the closest Indigenous-owned land to the construction site. Since the establishment of Sacred Stone Camp, thousands of water protectors camped on the Sioux reservation and organized to prevent the construction of the pipeline.

The #NoDAPL movement has become the largest inter-Indigenous alliance on Turtle Island in centuries, with over 200 nations represented in the protest. Due to the courage of First Nations activists like LaDonna Bravebull, the #NoDAPL movement grew to become one of the most powerful and widely supported Indigenous rights movements in recent decades.

In addition to her direct action near the construction site, LaDonna Bravebull conducted numerous interviews and wrote several articles to popularize the #NoDAPL movement. The Lakota-Dakota leader often highlight the state's racist hypocrisy in the handling of people protesting for land rights.

For example, European American ranchers like the Bundys, who encroached on protected lands in Nevada for decades, confronted federal agents in 2014, and occupied the Malheur Wildlife Refuge in 2016, were deemed innocent by the courts. At the same time, First Nations activists who peacefully protested DAPL, faced hefty fines and years in jail.

In her article, "Why do we punish Dakota pipeline protesters but exonerate the Bundys?" LaDonna Bravebull notes that the Bundys and the water protectors at Standing Rock were both concerned with rights to federal land. There were important differences though. For instance, the Bundy militia were fighting for their right to make money by grazing cattle on protected ecosystems.

In contrast, the actions of First Nations people are not motivated by profit. The Sioux only want to protect their sacred lands and water supply. In response, the state confronts Indigenous activists with violence and hostility, while protecting the rights of corporations to pollute Native peoples' survival resources.

When I began to look into the Bundy’s standoff at the Malheur Refuge, I became angry. That place is a locus of ancestral heritage of the Burns Paiute Tribe, which the Bundys knowingly desecrated. They reportedly dug latrines through recognized cultural sites. As a tribal historic preservation officer, my heart broke when I heard they allegedly rifled through some 4,000 cultural items that had been kept in the museum. Some of the sacred objects they destroyed were hundreds of years old. The Bundys did not reclaim that land. It was never theirs. It is Paiute land.iii

In comparison to the armed face-off of European American ranchers in 2014 and 2016, the Lakota-Dakota activist emphasized the peaceful nature of Indigenous water protectors' protest,

From the beginning, we at Standing Rock gathered in a spirit of prayer and non-violent resistance to the destruction of our homeland and culture. We came together with our ceremonies, songs and drums. Weapons are not allowed into our camps. The Bundys’ occupation began with threats and guns. It was violent from the outset, and the people they pretended to represent did not even condone it.

Instead of handguns, shotguns and rifles, First Nations employed songs, drums and dance. The peaceful protesters never represented a danger to local authorities, but they were considered as such. LaDonna Bravebull describes how First Nations water protectors were treated by the police, state and private security forces,

While we stand in prayer, we have assault rifles aimed at us, we are attacked by dogs, pushed from our sacred sites with pepper spray, shot with rubber bullets and bean bag rounds and Tasers, beaten with sticks, handcuffed and thrown in dog kennels. Our horses have been shot and killed.

The scene the female Lakota-Dakota leader describes is reminiscent of centuries of European settlers' genocidal campaigns against First Nations. LaDonna Bravebull argues that the attack on Native water protectors is also part of a pattern of environmental racism,

As indigenous people, we know these attempts to erase us very well, and one of the ways it works is through environmental racism. Indigenous lands across the country are the sites of nuclear waste dumping, toxic mining operations, oil and gas drilling and a long list of other harmful environmental practices, but see very little benefit from these projects. We live in the sacrifice zones.iv

First Nations are on the front lines of resistance to the carbon-based economy and climate pollution. The proximity of Indigenous communities to fossil-fuel production sites means that they suffer some of its worse polluting effects. In order to preserve their existence, First Nations often find that they have to fight against the confluence of interests and combined forces of the fossil-fuel industry and post-colonial governments.
The Lakota-Dakota leader describes how Indigenous people are able to persevere and resist the powerful alliance of capitalism and the state,

The national guard and state police have been reinforced by forces from seven other states, to push corporate interests through our home, but together with our relatives, we stand up. We are still here. We have always welcomed everyone to come stand with us against the injustices of the federal government. Joining forces would be a source of great power – if we stand together to confront racism and destruction of the land. But we will do that with prayer, not guns. We are the people of this land. We have the roots growing out of our feet. We stand with compassion and prayer. They cannot break us.

After years of protest, the Standing Rock Sioux Tribe and Indigenous organizers scored a legal victory on June 6th, 2020 when a federal judge ordered Dakota Access controlled by Energy Transfer Partners, to stop operations and empty its pipelines of all oil pending an environmental review.
Sista Brave Bull underwent brain surgery in 2020, and her family announced her death on April 10th, 2021. North Dakota State Representative Ruth Buffalo stated, "Her courage was contagious and inspiring. She was very knowledgeable of the extensive history of the land and worked to preserve our history and sacred sites." And, South Dakota state Senator Red Dawn Foster noted, "She inspired the world with her love for the water, the land, the people, and the love she shared with her husband Miles."v