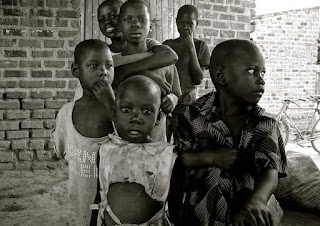 Malnutrition affects one in every three people worldwide, afflicting all age groups and populations, and plays a major role in half of the 10.4 million annual child deaths in the developing world. And, malnutrition continues to be a cause and a consequence of disease and disability in the children who survive.(494) The most visible form of hunger is famine, a true food crisis in which multitudes of people in an area starve and die.

There are over 850 million people who are chronically hungry. This is the largest number and proportion of malnourished people ever recorded in human history. Plus, being underweight is a major problem globally. A quarter of women in India and Bangladesh are underweight. And a fifth of men in India, Bangladesh, Timor-Leste, Afghanistan, Eritrea and Ethiopia are underweight.(495) Being underweight put a person at risk for multiple health problems including anemia, infertility and osteoporosis.

In the entire developing world, or Global South, hunger and poverty are intense and may worsen as economic growth across the world stalls. From 2005 and 2008 food prices almost doubled. To make matters worse, from 2007, there has been a sizable slowdown in food aid, bringing hunger reduction "essentially to a halt for the developing countries as a whole."(496)

As many as 2.8 billion people on the planet struggle to survive on less than $2 a day, and upwards of one billion people lack reasonable access to safe drinking water. There is an enormous and persistent food gap between the Global South and the developed North. To illustrate, the average person in the industrial world took in 10 percent more calories daily in 1961 than the average person in the developing world consumes today.(497)

The large numbers of poor and malnourished people in the world are unacceptably high, but these numbers may be much higher due to under-counting. Misleadingly, the UN set the threshold for hunger as the minimum calories needed for a "sedentary lifestyle." In reality, the number of hungry people could be as high as 1.5 billion, or in excess of 25 percent of the world's adult population if the threshold was set as the minimum needed for "normal activity."

And, numbers of the hungry would jump to 2.6 billion, or nearly 45 percent of the global adult population, for the minimum calories needed for "intense activity." Currently, 4.3 billion people live on less than $5 a day. Although higher than the World Bank poverty criteria at $1.25 a day, one report showed that a realistic poverty measure would be around $10 a day.(498) This standard indicates over three-quarter of humans live in poverty.

One-fifth of the Earth's 7 billion people have no land and possessions at all. These "poorest of the poor" are nonliterates lacking safe drinking water and living on less than a dollar a day. Many spend about 80 percent of their earnings on food, but are still hungry and malnourished. The average US house cat eats twice as much protein every day as one of the world's poorest of the poor, and the cost to care for each cat is greater than a poor person's annual income.(499)

Half of the world's population have enough food to provide energy, but suffer from individual nutrient deficiencies. Billions of people lack iron, iodine, vitamin A, and other vital nutrients. In addition, racial, caste, ethnic, and religious hatred, along with monetary greed, cause food deprivation for whole masses of people around the globe. And, food insecurity is about to get worse.

The UN estimate that climate transformation will affect poor countries the most, and inflate food insecurity. Oxfam predicts world hunger will worsen as planetary heating inevitably affects crop production and disrupt incomes. The organization suggest the number of people in the peril of hunger might climb by 10 to 20 percent by 2050, with daily per capita calorie availability falling across the world.(500)

Food inequality is also increasing. Worldwide, 2 billion people live primarily on an animal-based diet, while double that sum, or 4 billion people, live primarily on a plant-based diet. The UNEP estimated that calories lost from feeding cereals to animals could feed an extra 3.5 billion people.(501) Another analysis calculated that 4 billion people could be fed with the crops devoted to livestock. The single biggest intervention to free up calories would be to stop using grains for cow carcass production in the US. By far, the US, China, and Western Europe account for the bulk of the 'diet gap,' and corn is the main crop being diverted to animal feed.(502)

The World Health Organization (WHO) estimated that the number of people fed in a year per hectare (2.5 acres) ranged from 22 individuals for potatoes and 19 for rice, to one and two persons, respectively for cow and sheep flesh. The agency added that the low energy conversion ratio from feed to carcass is a concern since most of the cereal grain being produced is diverted to livestock.(504)

A Bangladeshi family living off rice, beans, vegetables and fruit may live on an acre of land or less. In sharp contrast, the average American, who consumes around 270 pounds of animal carcass a year, needs 20 times that.(505) The current global average animal consumption is 100g (3.5 oz) per person per day, with about a ten-fold variation between high-consuming and low-consuming populations.(506)

For most people in developing countries who obtain their protein from plants, eating animal flesh is a luxury. A kilogram (2.2 lb) of animal carcass can cost from $2 to $5 in the local markets, which is several days’ wages. A typical African eats only 20 kg (44 lb) of animal flesh a year, well below the world average.(507)

These findings suggest that over-consumption and dietary habits are of the essence for understanding resource use and greenhouse gas (GHG) pollution, as opposed to expanding population being the primary driver as is popularly argued. That is, population's importance is related to lifestyle expenditures, and specifically to the over-consumption class.

A 2011 report concludes, “The mass consumption of animals is a primary reason why humans are hungry, fat, or sick and is a leading cause of the depletion and pollution of waterways, the degradation and deforestation of the land, the extinction of species, and the warming of the planet."(508)