Diet or Over Population? 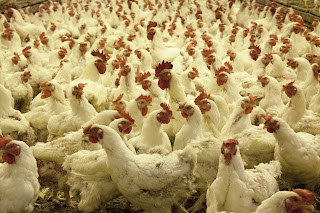 Substantial modifications in population size, age structure, and urbanization are expected in many parts of the world this century. These variations can affect energy use and greenhouse gas (GHG) outflows. In particular, aging, urbanization and variations in household size can substantially influence GHG footprints in some regions. Aging will occur in most regions, due to declines in both fertility and mortality.

Aging is expected to be particularly rapid in regions like China that have recently experienced sharp falls in fertility. On the positive side, slowing population growth could provide 16 to 29 percent of the GHG reductions suggested to be necessary by 2050 to avoid dangerous climate transformation.(490)

During a span of 46 years, from 1961 to 2007, a review of data from the UN's Food and Agriculture Organization (FAO) showed that in most regions, diets became richer while available land for food diminished. In many regions, dietary change may override population growth as a major driver behind land requirements for food in the near future.(492)

Potential land savings through yield improvements are offset by a combination of population growth and dietary change. These dynamics were the largest in developing regions and emerging economies. Also, additions to the total per capita food supply is not occurring everywhere around the world. In some rich, developed regions, such as Northern Europe and Oceania, food supply levels remain constant.

In most developed regions, the share of animal products is extraordinary high. From 1961 to 2007, food animals constituted one-third of the available calories in the Global North, compared to 10 percent or less in many of the poorer regions in the global South. These dynamics are set to change. The FAO projects that world population will expand 34 to 41 percent by 2050 to reach 8.9 to 9.1 billion. Food demand will soar upwards by 70 percent, and daily per person calorie intake will rise to 3,130 calories.

Food is a major part of climate warming, but it is also essential for survival, security and equity. Although the consumption per capita of cereals is likely to stabilize, population growth will escalate the demand for both food animals (almost doubling) and cereals (50 percent) by 2050.(493)