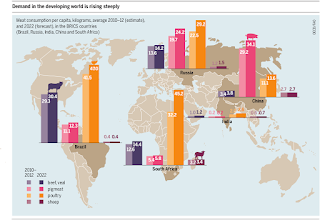 Intake of food animals is high in the global North, but the global South is catching up and this confluence spells disaster. While the international food trade complicates using national figures, a country-specific analysis of carnism is still instructive. China is the biggest consumer of both animal carcass and cow's milk products, with the US, the EU, and Brazil in the top five.(529)

One large-scale survey in the UK looked at the average greenhouse gas (GHG) discharges associated with a standard 2,000 kcal diet in kilograms of carbon dioxide equivalents per day (kgCO2e/day). It was 7.19 for high meat-eaters (defined as in excess of 100 g or 3.5 oz per day), 5.63 for medium meat-eaters, 4.67 for low meat-eaters, 3.9 for fish-eaters, 3.81 for vegetarians and 2.89 for vegans. Dietary GHG outflows in meat-eaters were twice as high as those in vegans.(536)