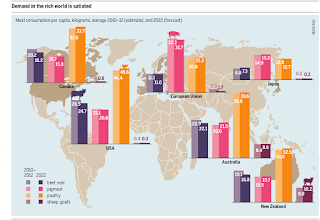 Agriculture generates over a quarter of the world's greenhouse pollution, overwhelmingly from livestock production. There are billions of farm animals worldwide, far surpassing human populations. In 2013, the cattle population reached 1.4 billion animals, up 54% from 1963. The number of chickens ballooned from 4.1 billion to 21.7 billion between 1963 and 2013. During the same period, the pig population soared upwards 114% to reach 977 million.(520)

Animal numbers will proliferate along with greenhouse gases (GHGs). Pork and poultry will grow at faster rates than cows. According to one study, there will be "a net increases in GHGs from the agricultural and livestock sectors but a diminishing trend in the emissions intensities across commodities (GHGs per unit of product)."(521)

'Red meat' refers to cow, pig, sheep, and goat carcass, and their flesh contained in processed foods. 'Processed meat' refers to nonhuman animal flesh preserved by smoking, curing or salting, or addition of chemical preservatives, and flesh contained in processed foods. Both are set to expand sharply by 2050. Global animal carcass production has quadrupled from 78 million tonnes (mt) (171 billion lb) in 1963, to 308 mt (678 billion lb) in 2012. For 2014, the Food and Agricultural Organization (FAO) forecasts a further expansion to 311.6 mt (686.9 billion lb). Annually, the world produces 124 mt (273 billion lb) of chicken and 59 mt (130 billion lb) of cow carcass.(522)

By 2012, on average, every person on Earth consumed 42.9 kg (94.4 lb) of animal flesh alone. In industrialized countries, average animal carcass consumption reached 76.2 kg (168 lb) per year. And in developing countries, the annual average animal flesh consumption was 33.4 kg (73.6 lb). People living in developed countries such as Australia eat roughly their own weight in animal carcass every year, consuming in excess of 80 kg (176 lb) each, or about 224 grams (8 oz) a day. That is the equivalent of almost two quarter-pound burgers every day. In Asia, the animal sector is expected to see an 80% growth by 2022.(525)

And climate-altering gases from food production will go up 80% if animal flesh and cow's milk consumption continue to climb at its current rate.(526) From 1970 to 2000, chicken egg consumption has doubled worldwide, with a bigger increase in developing countries compared to industrial countries. During this same period, there was little variation in butter and cheese intake at the global level.(527)

Global animal carcass production is projected to double from 229 mt (504.8 billion lb) in 1999/2001, to 465 mt (1.024 trillion lb) in 2050. Almost half the additional carcass consumed will come from chicken carcass by 2022. Cow's milk output is projected to swell from 580 mt (1.278 trillion lb) to 1,043 mt (2.298 trillion lb) in the same period. The daily average in developing countries is 47 grams (1.6 oz). Based on this huge difference in consumption, one team of medical experts argue that "for the world's higher-income populations, greenhouse-gas emissions from meat eating warrants the same scrutiny as do those from driving and flying."(528)