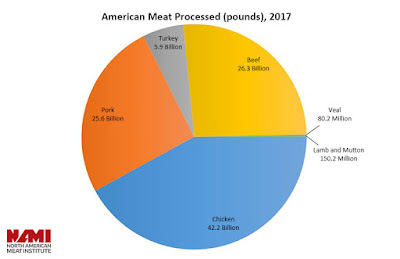 The US consumes the most livestock products globally, with each American eating an average 125 kg (275 lb) of animal flesh a year – equivalent to over 400 sirloin steaks from cows.(537) Flesh intake is 75 pounds higher than a century ago. Even if the average American eats 20 percent less carcass in 2050 than in 2000, the total US animal consumption will still be 5 million tons greater in 2050, due to population growth.(538)

In addition to animal flesh, Americans ingests 33 pounds of cheese and nearly 60 pounds of added fats and oils. Animal products account for over half of the value of US agricultural products, often exceeding $100 billion per year. Consumption of cheese has spiraled upward and added oils have escalated, too.

Remarkably, the number of cow's milk operations in the US declined from 650,000 in 1970, to 90,000 in the early 2000s. Over the same period, the average herd size multiplied five-fold, from 20 cows to 100 cows. This shows the industry is becoming over intensive and concentrated.

The US is the world's third-largest producer and consumer of pigs and pig products. On top of that, the US is the world's largest exporter of pigs and pig products, with exports averaging over 20 percent. In 2013, around 23.1 billion pounds of flesh was produced from pigs, compared to 16.9 billion pounds in 1993, and 15.1 billion pounds in 1983. During the last two decades, the value of US aquaculture production rose to nearly $1 billion, but it still remains a small part of global production. The vast majority of animal production from this sector comes from Asia and Latin America.