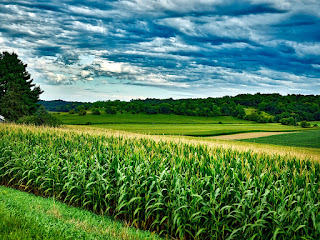 It took 50,000 years to reach a population of one billion in 1830. But by 2000, the world's population was six billion, and it passed seven billion in 2012. The extraordinary multiplication of humans has been accompanied by a similar addition in the population of domesticated food animals. With the projected increase in both groups, over the next 50 years, Earth will need to produce as much food to feed humans as it took to feed the species for the last 10,000 years.

In 1995, for the first time, the volume of animal carcass produced in developing countries exceeded that of developed countries, and since then the gap in cow's milk output between the two has been narrowing.(40) The livestock revolution has negative implications for global health, livelihoods and environment. Traditional diets are being replaced by diets higher in refined sugars, refined fats, oils and animal products. This conversion escalates the flow of nutrients into the environment, which is linked to global warming and the loss of biodiversity.

These three human-induced shifts have led to overstepping the ‘planetary boundaries’(41) or ‘the upper tolerable limits’ of the regulatory capacity of the earth system.(42) The planetary boundaries represent critical thresholds for shifts in the major earth system processes beyond which non-linear, abrupt environmental modifications may occur on a continental or planetary scale. The Western animal-based diet is a major contributor due to its effects on planetary heating, biodiversity loss, water and land degradation.

Owing to the extraordinary shifts in consumption habits, livestock production is in direct competition with humans for scarce land, water, and other natural resources. Astonishingly, despite its wide-ranging social and environmental impacts, the livestock sector is not a major force in the global economy, generating under 1.5% of total GDP.

Much of the grain grown in developed nations goes to feed not human beings, but domesticated animals. Livestock requires a lot of grain and the grain is used very inefficiently. By way of illustration, one filet mignon requires 32 lbs. of corn and the animal converts that grain into calories at just 3% efficiency.(43)

Livestock production takes up an enormous size of land: 6.2 million sq. mi (16 million sq. km) are currently used to grow crops — an amount of land about equal to the size of South America — while 11.6 million sq. mi (30 million sq. km) has been set aside for pastureland, an area equal to the entire African continent. Altogether that is greater than 40% of the dry land on the planet. While 56 million acres of US land are producing hay for livestock, only 4 million acres are producing vegetables for human consumption.(44) Humans use 60 times the size of land to grow and raise food than is used to live on.

Farming takes half the world's available freshwater, much of which is used for irrigation. Farm animals consume one-third of global cereal production, 90% of soy meal and 30% of the fish caught. Upwards of half the world's crops are used to feed animals. In the US, over 33% of the fossil fuels produced are used to raise animals for food.(45) Grain used to feed animals could feed an extra 1.3 billion people. Animal-based diets for the middle class means hunger for the poor. On top of this, the manure from factory farms pollute rivers and the sea, creating dead zones sometimes hundreds of miles wide.

When a tree is cut down, it releases carbon into the atmosphere. But when it is allowed to grow it continues to absorb carbon. The more trees humans cut down, the greater we compound the carbon problem. Conversely, the more acres of forests humans regrow, the stronger the potential for climate recovery. Humans inherited a planet with 6 billion hectares (23m sq mi) of forest and about 4 billion (15m sq mi) remains. At the current rate of forest loss, 19 million hectares (73k sq mi), the size of Washington state, will be destroyed each year. Over half of Earth’s forests will be wiped out within a century. Of the world's 1.5 billion acres (2.3m sq mi) of remaining rainforest, only 500 million acres (781k sq mi) are protected.(46)

Every year, between 10 and 15% of the carbon released into the atmosphere, or 5 billion tons of CO2, comes from deforestation. This is about the same volume of carbon pollution produced by automobiles, trains, ships, and airplanes combined. Fortunately, the cost of rainforest conservation is economical. For as little as the price of a cup of coffee a day, individuals can help to save an acre of rainforest through various land trusts and NGOs. And each acre of rainforest safely stores about 200 tons of CO2, which is in excess of the avoided CO2 from buying an electric car, or installing home solar panels.

Besides the environmental damage, Western mainstream animal consumption is a factor in spiraling human ill-health, diabetes, cancers, non-communicable and chronic diseases, malnourishment, and obesity. And, it is causing antibiotic resistance bacteria, the spread of infectious diseases, hunger and global epidemics.

Rather than curtailing this dietary catastrophe, vested interests continue to promote animal carcass, chicken eggs, and cow's milk consumption, and block all efforts at reform. If people are deliberately misinformed or have no access to reliable information, what chance do they have to make the right food choices?

While elevated atmospheric CO2 can act as a fertilizer to enhance plant growth, and water use efficiency, in a wide range of crop species, these positive effects may not compensate for losses associated with heat stress, lessen water availability, weather extremes, accrued tropospheric ozone, and transformations in weed, insect, and disease dynamics.(47) Extreme temperatures and rising ozone can cause severe losses in a range of staple crops, like wheat, maize, soybean, rice, and fruit.(48) Variations in the yield of these major crops have extraordinary implications for food pricing and availability for families across the world, in developed and developing nations.(49)