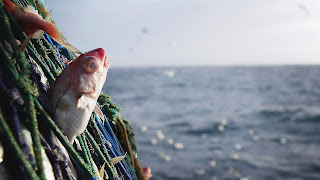 Pandemics Ahead: Number 20 in a series looking at the link between animal protein and global health disasters.

The future of marine life face threats from multiple fronts, including (i) overfishing, (ii) unsustainable seafood farming practices, (iii) ocean pollution, and (iv) acidification. In addition, due to seafood's short shelf life, there is a huge magnitude of waste in the fishing industry. Waste of seafood needs to be monitored and incorporated into the livestock supply chain.

The US edible seafood supply is around 4.7 billion pounds (2.1b kg) per year, which consists of domestic and imported products minus any exported products. Appallingly, from 2009 to 2013, nearly half of the sea creatures was lost and wasted as 40 to 47 percent went uneaten, around 2.3 billion pounds (1b kg).(972)

The greatest portions of waste occurred at the levels of consumers with 51 to 63 percent of loss attributed to consumption, a staggering 1.3 billion pounds (590m kg).

Among all the fishing methods, bottom trawling, a fishing method that drags a large net across the sea floor, is the most destructive to oceans. Bottom trawls are utilized for catching desirable fish that live on the seafloor that is used for food, such as shrimp, cod, sole and flounder. However, the weight and width of a bottom trawl can destroy large areas of seafloor habitats that give marine species food and shelter. Bottom trawlers have affected 20 million square miles (52m sq km) of ocean, turning parts of the continental shelf to rubble. Such habitat destruction can leave marine ecosystems permanently damaged.(973)

In the US, bottom trawling occurs on the Pacific, Atlantic and Gulf coasts, capturing in excess of 800 million pounds (362m kg) of marine life in 2007. Bottom trawls are commonly used by many fishing nations and on the high seas as well. Undesirable marine creatures are usually discarded by commercial fisheries.

This collateral damage, called bycatch, can equal up to 90 percent of a trawl’s total catch.

In 1994, the UN's Food and Agricultural Organization (FAO) estimated that between 17 and 39 million tons (average 27 million) of fish are discarded each year in commercial fisheries. Fisheries in the Northeast Pacific alone produced a bycatch exceeding one billion individuals annually.(974)

Discard problems in the Northwest Atlantic were classified into four groups: (i) marketable species too small or otherwise prohibited from landings, (ii) species for which no current market exists, but are caught along with commercial or recreational species, (iii) species-specific fleet sectors discarding another fisheries target species, and (iv) non-fishery bycatch species, such as marine mammals, turtles, and birds.

For every one pound of fish caught for food, an average of 5 pounds (2.2 kg) of unintended marine species are caught and discarded as bycatch. For every pound of shrimp, 26 pounds (12 kg) of other sea creatures are killed and tossed back into the sea. As many as 40 percent (63 billion pounds) of fish caught globally every year are discarded. In a multitude of fisheries, the percentage of bycatch far outweighs the volume of target catch.

Case in point, for every shrimp caught by nets dragged behind boats (or trawls) in the Gulf of Mexico, over four times its weight is made up of bycatch. Each year, 20 percent of the total US catch is thrown away, and as many as 650,000 whales, dolphins and seals are killed by fishing vessels.(975)

In addition to by-catch, tons of derelict fishing gear or “ghost nets” are silently killing dolphins, seals, and sharks and other ocean animals that become entangled in them. When nets get snag on the seafloor, crews leave them behind, but those nets keep on fishing and killing, perpetually. Just as ocean currents are pushing plastics to convergence zones, also called gyres, abandoned nets often end up funneled into the same spots.

Ghost nets trap countless numbers of marine animals for years, decades, and perhaps even centuries. In the Florida Keys National Marine Sanctuary over 85,000 abandoned lobster and crab traps are ghost fishing, while in the Chesapeake Bay, more than 913,000 crabs are caught by derelict traps each year.(976)

The state of the world's marine fisheries is worsening as evidenced by (i) the declining global marine catch, (ii) the larger percentage of over-exploited fish stocks, and (iii) the lower proportion of non-fully exploited species. Switching to less destructive fishing methods represents a partial solution at best, while adopting a plant-based diet is a far better intervention in the marine crisis.