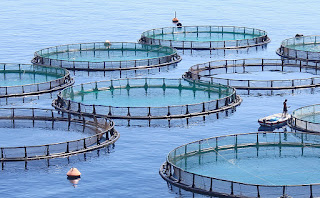 Pandemics Ahead: Number 21 in a series looking at the link between animal protein and global health disasters.

About 600 aquatic species are raised in captivity in 190 countries, including hatcheries that produce fish for stocking to the wild, particularly in inland waters. While aquaculture currently accounts for a smaller part of the livestock industry than land animals, it is the fastest growing sector.

Eighty-six percent of US seafood is imported, and about half of those imports are raised on factory farms, called aquaculture. Asia is the number one producer of these aquaculture products, dominating 89% of the industry.(978)

Fragile ecosystems like mangroves are being replaced by fish farms, which are projected to provide most of the fish consumed within 20 years. Farming can occur in coastal areas, such as with oyster farms, and inland, in lakes, ponds, tanks and other enclosures. Similar to livestock's impact on forests, large-scale fish farming is leading to the pollution and destruction of wetlands, estuaries and mangroves, and displacement and impoverishment of hundreds local communities across the world.

Many of the top animal genetics firms have begun research and development in aquaculture. They work with only a handful of species, primarily Atlantic salmon, rainbow trout, tropical shrimp and tilapia. Many popular seafood species, like salmon, are carnivorous. So, when they are farmed, they eat up to five pounds of small fish to produce just one pound of flesh - a net loss of protein.

Incredibly, many aquaculture companies in China, Thailand, Vietnam, and other Asian countries feed fish with untreated feces from pigs, chickens, geese and other animals as the primary nutrition. The manure contaminates the ponds with microbes like salmonella and makes fish further susceptible to diseases.(979)

Consequently, farmed fish are given immense quantities of antibiotics to avoid disease, many of which are banned for use in the US. To boot, baby fish are fed testosterone and other growth hormones. Aquaculture may cause harm to the environment directly through (i) the release of organic effluents, and (ii) disease treatment chemicals. They may cause harm indirectly through (iii) their dependence on industrial fisheries to supply feed of smaller fish, and (iv) by acting as a source of diseases or genetic contamination for 'wild' species.

Farmed fish have been shown to have high levels of bacteria, PCBs and insecticides. Around 25% of the food-borne illness outbreaks caused by imported food from 2005 to 2010 in the US involved seafood, more than any other food commodity.(980) Health researchers estimate that the inflammatory potential of consuming tilapia is far greater than that of cow or pig carcass.(981) Farmed salmon may have at least 10 times the sum of cancer-causing pollutants compared to the 'wild' variety, and dioxin levels are 11 times higher. On top of this, farm-bred fish have lower levels of healthy nutrients.(982) Shrimp is the dirtiest of all seafood.

Farmed fish are fed fish-meal, which means that fish low on the food chain are caught, worsening the marine outcome of bycatch. The impact on the menhaden, a type of small fish caught to be fed to farmed fish, is devastating, as this critical little fish is facing severe threats.(983)

Across Latin America and Asia, pollution from aquaculture is leading to dead lakes and extinct species. On top of that, aquaculture production is vulnerable to adverse impacts of disease and environmental conditions, and massive die-offs are a common occurrence in the industry. Disease outbreaks in recent years have affected farmed Atlantic salmon in Chile, oysters in Europe, and marine shrimp farmed in several countries in Asia, South America and Africa. These incidents have resulted in partial or sometimes total loss of production.

In 2010, aquaculture in China suffered production losses of 1.7 million tonnes (3.7 billion pounds) caused by natural disasters, diseases and pollution. Disease outbreaks virtually wiped out marine shrimp farming production in Mozambique in 2011.(984) In 2014 alone, there was (i) a massive die-off of fish in 44 fish farms due to Vibrio bacteria along the coast of Singapore; (ii) over 365,000 salmon were killed due to an outbreak of infectious salmon anaemia virus in Norway, and (iii) Furunculosis bacteria led to the cull of 90,000 trout in New Jersey. In Pennsylvania, (iii) around 52,000 young trout died in a hatchery; and (iv) about 280,000 salmon were killed by a 'rare algae bloom' in Vancouver, Canada.(985)

In 2016, the alarms went off again in the salmon industry in Chile, one of the largest producers of this fish in the world. A massive algae bloom killed 23 million salmon, a loss of up to 20% of the country's annual production, or around 100,000 tonnes, valued at $800 million.(986) Earlier in Chile, an outbreak of ISA, a fin-fish disease caused by a virus, cost the fish farm industry $2 billion in damages in 2007.

Chile's loss is equal to the value of Canada's entire farmed salmon industry, valued at $813 million in 2013. The problem has been made worse by nitrate-rich runoff from livestock from nearby land around the salmon farms, which are typically offshore or in estuaries.

Moreover, farmed fish are becoming inundated with human pollution. For example, young salmon in the north Pacific tested positive for more than 80 different drugs, including cocaine, antidepressants such as Cipro, Paxil, Valium and Zoloft, and dozens of other medications like Flonase, Aleve, Tylenol, Tagamet, OxyContin, and Darvon.(987)

Young salmon were likewise contaminated with nicotine, caffeine, fungicides, antiseptics, anticoagulants, and chemicals from personal care products. The tissues of migratory chinook salmon and local staghorn sculpin also contained these compounds – even in the fish found in estuaries far from sewage treatment plants where the water was previously considered "pristine."