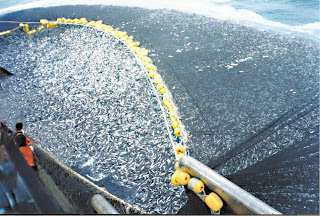 Pandemics Ahead: Number 19 in a series looking at the link between animal protein and global health disasters.

Despite wide-ranging environmental impacts, fish is a relatively small source of protein. Fish accounts for 16.6% of the world population’s intake of animal protein, and 6.5% of all protein consumed.(959) The 2010 US Dietary Guidelines recommended augmenting seafood intake to 8 ounces (0.2 kg) per person, per week, and consuming a variety of seafood in place of some red meat and chicken.

Achieving these dietary levels would require doubling the US seafood supply with serious consequences. Global fisheries add $270 billion a year to global GDP, but overfishing, the taking of fish beyond sustainable levels, is reducing fish stocks and employment in many of the world's regions.

While fish catches worldwide are expanding, fish stocks are rapidly being depleted by over-fishing. The loss of ocean biodiversity is accelerating, and 30 percent of the seafood species humans consume have already crashed. In fact, “sustainable” seafood may disappear by 2050.(960)

The greatest enlargement in seafood consumption has occurred in Oceania and Asia, especially China, with hikes from 11 g (0.4 oz) per capita per day in 1963, to 69 g (2.4 oz) per capita per day in 2003. Compared with industrial countries, developing countries have seen larger gains in freshwater fish consumption, with China having a 10-fold upsurge from 1963 to 2003. Globally, the main fishes consumed are white fish, oily fish and seafood invertebrates.(961)

Close to 90% of the world’s fishery catches come from depleted oceans and seas, as opposed to inland waters. On top of that, there are serious human rights concerns over enslaved and bonded labor on fishing vessels, diving operations and processing on land.

In 55 years, humans have eliminated 90% of the ocean's top predators, including sharks, tuna, swordfish, marlin, and mackerel. Now, a small number of species support the majority of the world’s fisheries. Some of the popular species are herring, cod, anchovy, tuna, flounder, mullet, squid, shrimp, salmon, crab, lobster, oyster and scallops.

The UN's Food and Agricultural Organization (FAO) fisheries data suggests that global marine catches increased to 86 million tonnes in 1996, then slightly declined. Even so, catch trajectories differ considerably from the national data submitted to the FAO. The exact amount is uncertain since the number of fish caught globally is underreported by about 30 percent.(962)

Despite mercury and other hazards, humans have depleted the oceans for marine protein. The world had 4.36 million fishing vessels in 2010, and almost all have engines or motors that operate on fossil fuels. Fishing activity is characterized by considerable fuel consumption and release of biocides from anti-fouling paint on the boats.

The depletion of fish stocks widens the distance that is necessary to travel in order to catch certain species of fish. In 2000, 80 million tons of fish required the burning of 13 billion gallons (50b l) of fuel, and released of 134 million tons of CO2. Thus, global fisheries used up to 12.5 times the mass of fuel energy that they provided as edible-protein energy.(963)

And while the 'global warming potential' (GWP) and acidification potential of 1 kg wild cod fish is lower compared to 1 kg chicken, the dry matter content is not equal. For example, the GWP of 1 kg fresh shrimp is similar to that of 1 kg fresh chicken, but three times higher for 1 kg peeled and frozen shrimps.(964)

There are 3 kg (6.6 lb) CO2 costs associated with each kg (2.2 lb) of frozen salmon brought to North America from Chile, and 5.5 times that GHG cost for fresh Chilean salmon flown into the Northern Hemisphere. In comparison, growing, marketing, peeling and boiling a kg of potatoes takes 280 grams (0.6 lbs) of CO2.(965)

The peak rate of caught fish was 1988 at 130 million tonnes. Since 1989, the world capture of marine fish has declined by 500,000 tonnes per year despite mounting fishing effort. Each year, usually 90 million tonnes (200 billion pounds) of fish is pulled from the oceans, but in the last seven years (2004 to 2010), landings of all marine species have declined, except anchovy, by around 73.3 million tonnes (161b lbs).

Since 2007, both the Mediterranean–Black Sea and the Southwest Atlantic have seen declining catches, with a plunge of 15 percent and 30 percent, respectively. Over 25 percent of US fish stocks are over-fished, which has led to the collapse of numerous fisheries and fishing communities.

There have been sharp declines in the populations of tuna, cod, and marlins. During the 1960s and ’70s, shelf fisheries in the Atlantic started to collapse due to overfishing. Operations moved to the deep sea, and in turn, deepwater fishing has seriously affected the populations of deep-sea fish, such as the roundnose grenadier, onion-eye grenadier, spiny eel, spinytail skate, and blue hake. The populations of these deep-sea fishes have plummeted by over 87 percent in 17 years. It is expected that these fishes will be driven to the point of extinction, to the detriment of the ecosystems in which they live.(968)

“Suction harvesting” swallows up huge quantities of krill that are processed, frozen, and stored on specially outfitted ships. The krill are used as feed for fish-farms (aquaculture) or transformed into omega-3 oil and other health supplements. The upshot is that seals, whales, and penguins are losing one of their primary sources of food.(969)