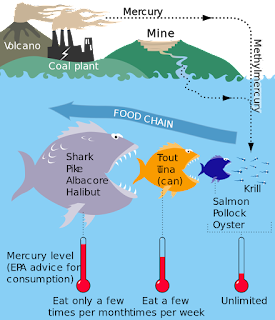 These have been a tripling of the surface water mercury content in the oceans, compared to pre-industrial conditions, and a 150 percent increase in the magnitude of mercury in the underlying thermocline water layer.(1046) Doses of mercury associated with typical rates of fish consumption may pose measurable endangerment to human health, and there is no safe threshold for this dangerous chemical.

Several experiments have documented mercury hazards from eating fish in the US (1047) and South Korea.(1048) Risks were identified with consumption of 120g of dried shark for methylmercury in Oman as well.(1049) In environments without oxygen, mercury combines with carbon to become methylmercury, a highly toxic compound. Bottom-dwelling fish consume methylmercury particles on the ocean floor and are then eaten by larger fish. Large fish such as sharks, swordfish and king mackerel contain the largest amounts of methylmercury because they are higher up in the food chain.

Since 2002, seafood consumption in the US has grown substantially, which means that US fish consumers have higher concentrations of mercury in their bodies. Tuna - canned light, canned albacore and fresh/frozen varieties - accounts for 37.4 percent of the total mercury inputs for US consumers. And alarmingly, between 1998 and 2008, mercury levels in yellowfin tuna have increased nearly four percent annually. This trend will continue and possibly accelerate, with dire implications for human health and a range of ocean species.(1050)

Mercury is particularly dangerous for pregnant women. Among other hazards, it can result in children born with brain damage. Tuna and sea bass are loaded with mercury, while shark and swordfish are worse. Exposure at high levels can harm the brain, heart, kidneys, lungs, and immune system. High levels in the bloodstream of unborn babies and young children may harm the developing nervous system, making the child less able to think and learn.

A study by Environmental Working Group (EWG) found that Mercury levels in women who frequently eat fish are 11 times higher than in women who rarely eat seafood. Findings show that almost 30 percent of the women had more mercury in their bodies than the level the US Environmental Protection Agency considers safe, 1 ppm (part per million).(1051) The limit of 1 ppm was calculated in 2000, but EWG has advocated for a stricter mercury limit of 0.58 ppm based on updated research from 2007. Almost 60 percent of women had more mercury in their system than this stricter limit.

During pregnancy, the dietary goal for omega-3 fatty acids (eicosapentaenoic acid or EPA) is 650 mg, of which 300 is docosahexaenoic acid (DHA). And, although some women eat more than twice as much fish as the average American, almost 60 percent of them still do not get the amount of omega-3s recommended during pregnancy from seafood in their diets.

Fish do not synthesize DHA or EPA, rather, these are derived from the plankton and microalgae they eat. So supplements made from algae-based DHA could be used to obtain omega-3s, instead of fish. Also, nuts and seeds such as walnuts, flax-seed and canola oil contain omega-3s, although the body has to convert these plant sources from alpha-linolenic acid (ALA) to DHA.(1052)