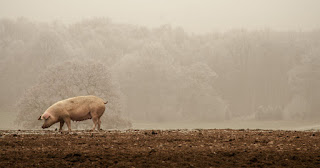 Pandemics Ahead: Number 16 in a series looking at the link between animal protein and global health disasters.

Animal-based agriculture can cause serious air quality problems that result from dust, smog, chemicals, and odors. People who live near or work on factory farms, breathe in numerous gases formed as manure decomposes. The stench of ammonia and other noxious fumes can be unbearable, but worse still, the gases contain many harmful chemicals.

The level of antibiotics 20 yards (18 m) away from a giant cattle feed-lot, is similar to an enclosed, industrial pig operation. Wind dispersed particulate matter from outdoor feed-lots carry prodigious amounts of antibiotics, antibiotic resistance genes, and bacteria, far downwind. Some of the transported bacteria can cause human infections.(1058)

In addition to endotoxin hazard for workers, the dust generated by animal activity and farming practices contribute to air quality problems far removed from factory farms. These widely dispersed air pollutants can cause respiratory illness, lung inflammation, and enhanced weakness to respiratory diseases, such as asthma. Massive discharges of reactive organics and ammonia from CAFOs play a role in the formation of ozone (smog) and particulates in the air, as well.

Large hog farms emit hydrogen sulfide, a gas that most often causes flu-like symptoms in humans. At high concentrations, hydrogen sulfide can lead to brain damage, but this gas is dangerous even at low levels. Its effects, which are irreversible, range from mild, a sore throat, to severe with seizures, comas, and even death. In 1998, the National Institute of Health reported that 19 people died from hydrogen sulfide emissions from manure pits.