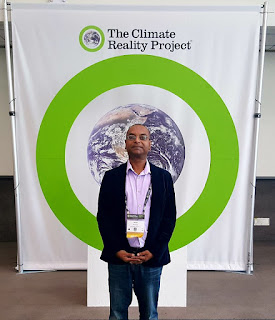 At the end of August, 2018, we spent three days at The Climate Reality Project training in Los Angeles, lead by former Vice-President Al Gore. The information-packed training was well-organized and attended by over 2,200 new trainees from 40 countries. There were several sessions on the climate crisis and solutions, including those adopted by California. Al Gore made a powerful 2 1/2 hour slideshow presentation on the first day of the event, and a 10-minute version of the same slideshow on the last day. Gore's presentations included several extreme climate events that occurred in July and August 2018.

Interestingly, the climate literacy and outreach training was underfunded by Alan Horn, chairman of Walt Disney Studios, who spoke on day three of the conference. Horn noted that one day this summer, as he got into his car in Los Angeles, the temperature gauge in his Tesla electric vehicle read 118 degrees Fahrenheit. And Gore revealed that one of his billionaire friends lost his home in a recent California fire. Climate change is affecting the rich, and some are realizing that their vast wealth may not be able to insulate their grandchildren from its worsening effects.

One of the most notable speakers was leading climate scientist, Prof. V Ramannathan of  Scripps Institute, who released a peer-reviewed study three months ago warning that Earth was facing an existential crisis. The leading climatologist noted that when he presented the paper at a recent conference in Europe, he expected some push-back from the conservative scientific community. However, to his surprise, not one person said anything. In private, other scientists admitted to Ramannathan that they had reached the same conclusion as well.

One of the most important takeaways from the event was understanding how the climate crisis and equity issues are inter-related. Environmental racism is structural, systemic and planned since polluting industries are usually located in disadvantaged neighborhoods. Minority communities are on the frontlines of the fossil fuel industry, and are dealing with its effects all day, year round. They need help, but the green movement has largely ignored issues facing minorities in the inner cities. Consequently, environmental injustices have become normalized, and even impacted communities view negative health effects as inevitable. Sadly, African American children suffer asthma at 10 times the rate of European American children, part of the collateral damage of the fossil-fuel economy.

We were especially moved by the story of 17-year old Nalleli Cobo, who was born and raised in Los Angeles, next to an oil well. As a child, Nalleli was sickly and suffered from asthma. When she was nine years old, Nalleli grew tired on being sick and suffering from toxic air pollution caused by the oil well and started to organize others in her community to resist the oil company. They group gained support from local environmental organizations and eventually were able to get the well shut down.

By shutting down one oil well, Nalleli and others in her community effected change that improved their health and lowered greenhouse emissions that impacts all of us. Nalleli proves that when we act locally, we can have global impacts. The zero hour for young people is now. We must act to help Nalleli and all children from being condemned to a living hell in hothouse Earth. We must do all we can to reduce, reuse, and recycle, travel less, eat plant-based foods, and lower our carbon footprints. Even if there is little or no chance for success, we must persevere. Our children deserve no less.