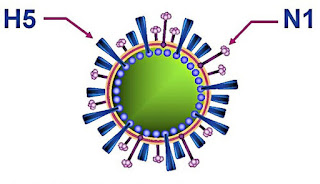 Pandemics Ahead: Number 3 in a series looking at the link between animal protein and global health disasters.
Excerpt from Meat Climate Change: The 2nd Leading Cause of Global Warming by Moses Seenarine, (2016). Xpyr Press, 348 pages ISBN: 0692641157) http://amzn.to/2yn7XrC
The deadly H5N1 strain of bird flu is essentially a problem of industrial chicken practices. Intensified stocking rates enhance the danger that crowded conditions in chicken farms will allow avian influenza to spread quickly. Waterfowl such as wild ducks are thought to be primary hosts for all bird flu subtypes. Though normally resistant to the viruses, the birds carry them in their intestines and distribute them through feces into the environment, where they infect susceptible domestic birds.(1001)

Sick birds pass the viruses to healthy birds through saliva, nasal secretions, and feces. Within a single region, bird flu is transmitted readily from farm to farm via (a) airborne feces-contaminated dust and soil; (b) by contaminated clothing, feed, and equipment; or (c) by wild animals carrying the virus on their bodies. The disease is spread from region to region by migratory birds and through international trade in live birds. Humans who are in close contact with sick birds, like chicken farmers and slaughterhouse workers, are at the greatest danger of becoming infected. Besides chicken, virus-contaminated surfaces and intermediate hosts such as pigs can be sources of infection for humans.

According to the WHO, 622 people were infected with H5N1 between 2003 and 2013, and about 60% of those individuals died. The majority of human H5N1 infections and deaths occurred in Egypt, Indonesia, and Vietnam.(1002) Small outbreaks of bird flu caused by other subtypes of the virus have occurred in the past. A less severe form of disease associated with H7N7 was reported in the Netherlands in 2003, where it caused one human death but led to the culling of thousands of chickens. Since then the virus has been detected in the country on several occasions.

A Chinese vaccine was made with H5N1 antigens, but chickens still get infected. And there is drift when the virus mutates in response to the antibodies. Now there are five or six versions of H5N1. Keeping wild birds away from domestic birds help to lessen the spread of H5N1. In 2013, a strain of H7N9 capable of causing severe pneumonia and death emerged in China, with the first confirmed cases detected in February that year and dozens of others reported in the following months. It was the first H7N9 outbreak reported in humans.

The medical industry and scientific community recognize the danger. A UN press release states, "Governments, local authorities and international agencies need to take a greatly increased role in combating the role of factory-farming, commerce in live, and wildlife markets which provide ideal conditions for the virus to spread and mutate into a more dangerous form..." Still, doctors and bureaucrats may be powerless against the livestock industry.