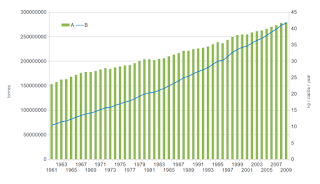 Eliminating subsidies for domesticates and feed crops would increase the price of livestock products and lower the intake of food animals. Placing limits on advertising and warning labels, as with tobacco products, would likewise curb demand. On average, a 10% spike in the price of cow flesh results in a 7.5% lowering of intake, and around 35% of carnists admitted that when chicken prices rise, they simply eat more vegetables.(652)

The UN Food and Agriculture Organization (FAO) published a report in 2013 on reducing carbon emissions in livestock production FAO 2013 authors admit that with the burgeoning volume of domesticated food animals, complementary measures may be needed to ensure that overall greenhouse gas (GHG) pollution is curbed. Yet, oddly enough, the report provide few details on how to achieve this reduction, thereby ignoring a vast body of research that shows how mitigating demand for animal flesh could feed larger numbers of people with less GHG pollution.

For over five decades, numerous institutes and research reports have demonstrated that cutting consumption can significantly reduce climate-altering discharges from the animal agribusiness sector. There were stacks of books published from the 1960s to the 1990s on animal-based diets and the environment. For instance, Ruth Harrison, in 1964(653); Frances Lappé, in 1971(654); Robbins, in 1987(655); Fiddes, in 1991(656); and Rifkin, in 1992.(657) These early works were influential and clearly linked carnism with environmental devastation.

At the beginning of the 21st century, a flurry of scientific papers began to probe the impact of diet and livestock on ecosystems, providing the missing primary data. Namely, in 2000, research by Renault and Wallender,(665) and Dutilh and Kramer(666) were published on water productivity and energy use in the food animal sector.

In 2003, Wirsenius,(667) Leitzmann,(668) Pimentel and Pimentel,(669) and Reijnders and Soret(670) conducted primary research on metabolism, nutrition, water use, protein choices and other aspects of livestock production. In 2004, Rattan Lal measured carbon outflows on farms(671), and in 2006, Eshel and Martin calculated the climate-altering pollution from various diets.(672)

This valuable body of pertinent scientific research was widely available before FAO's 2006 and 2013 assessment of GHG emissions from animal agribusiness. Peculiarly, the popular environmental literature and volumes of primary data on demand-side analysis were both ignored by the UN authors. Moreover, since the vast majority of people on the planet already eat a climate-friendly, plant-based diet, then it makes sense for the FAO to concentrate on transforming livestock over-consumption.

By way of illustration, a team of Italian researchers noted that a plant-based diet based on organic products has the smallest environmental impact. Their findings, published online in 2006, showed that cow carcass had the greatest impact, along with cheese, fish, and cow's milk.(673) This and many other studies were ignored by the FAO. The mitigating demand approach, based on personal action, helps to solve the food crisis, and social inequalities as well. The UN food agency refuses to come to grips with the larger issue of the inefficiency of animal-based diets, and by all odds, the Earth could support larger numbers of people for a given area of land farmed if humans ate lower on the food chain.(674)

In 2007, McMichael's team investigated ways to reduce the impact of livestock production on the environment and concluded that current efficiency measures were not producing the magnitude of amendments required to sufficiently impact GHG footprints. The most equitable way was a constriction and convergence policy. The team concluded that Western countries should considerably reduce their red meat consumption, and developing countries should not surpass this lower target.(675)

Demand-moderating policies are vital because of the overall low potential for reducing agricultural GHGs by technological means. Besides, there are inherently large land requirements for ruminant flesh production. So what humans eat does matter.(676)

Based on improvements in scale, the FAO's strategies for 30% GHG reduction have increased vulnerability and negative side-effects. Even if, somehow, efficiency improves and yield gaps are closed, the projected demand for food animals will continue to drive agricultural expansion.(677) Mitigating demand is an effective way to reduce the sector's climate-altering gases, but is not entertained by the leading food authority in the slightest.

FAO 2006 projects that the global agricultural area may expand by 280m ha (1m sq mi) in 2030, from the current 5.1b ha (20m sq mi) to 5.4b ha (21m sq mi). One team used these estimates and assumed a minor transition towards vegetarian food, with a 25% diminution in animal consumption, and a somewhat lower food wastage rate. In this scenario, land use drops to 4.4 billion ha (17m sq mi), and land use in high-income regions dwindles down further by about 15%.(678)

Demand-side measures offer a greater potential of 1.5 - 15.6 Gt CO2e per year in meeting food security and GHG emission challenges, than do supply-side measures. The latter offers only 1.5 - 4.3 Gt CO2e per year at carbon prices between $20 and $100.(679) At the national level, in the UK, for instance, the average diet embodies 8.8 kg (19.4 pounds) CO2e per person every day. Eliminating food animals from the diet will lower food-related climate-altering discharges by 35%.(680)

The UN food agency encourage public subsidies for the cattle industry to increase efficiency, but to help mitigate the escalating environmental impacts of cow carcass production, the FAO should instead call on governments to should stop subsidizing cow flesh production, and cease the promotion of cattle consumption. Governments should also regulate and control the future expansion of soybeans and extensive grazing.(681)

In an evaluation of processed protein food based on soy-beans and animal protein, researchers observed a variety of environmental impacts associated with primary production and processing. Notably, the impacts for animal flesh were four to 100 times greater than that vegetable protein, while the comparison of cheese impacts ranged from 5 to 21 times greater than vegetables. And, the energy use for fish protein was up to 14 times larger than protein of vegetable origin.(682)

Mitigating demand for animal protein is an effective way to reduce GHGs, but the FAO and other UN climate reports ignore this approach. The German consumer protection organization, Foodwatch, calculated that shifting from a conventional diet based on animal flesh and cow's milk, to a conventionally-raised vegan diet would reduce GHG pollution by 87%, while shifting to an organic diet containing animal carcass and cow's milk would only reduce emissions by 8%. By contrast, a 100% organic vegan diet would reduce GHG pollution by 94%.(683)

If humans restricted their diet to primary producers – eating plants, instead of eating the herbivores, fish and other animals that eat plants - the Earth could support much larger populations of people. Plus, there would be comparatively less land degradation because fewer acres would be needed for food production.

For demand-side animal protein measures to work, given the difficulties in implementation and lag in their effectiveness, policies and reforms should be introduced quickly. Also, mitigation programs could be integrated with other plans of actions, such as improving environmental quality and dietary health.