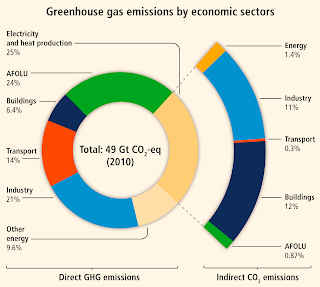 (IPCC: Total GHG emissions from economic sectors in 2010. AFOLU is agriculture, forestry and land use.)

Decarbonizing what we eat is just as important as decarbonizing what we drive or what we use to heat our homes. But animal agriculture is one of the most protected and supported industries in the world. National governments and international organizations shore up global economies, and the major domesticate producers who supply the world, regardless of environmental impact.

Peculiarly, greenhouse gas (GHG) discharges related to livestock production are generally attributed to the place of origin rather than the place of consumption. So efforts to shift consumption in a high animal consumption country might not lead to a reduction in its own emissions profile, which gives the country little incentive to act.

Moreover, livestock production is a valued livelihood and tradition in the heritage of many cultures across the globe. Small-scale animal husbandry is very different from industrial practices, but any efforts to encourage reductions in the industry is perceived as a threat to small farming and livestock heritage.

The upshot is animal agricultural being subsidized and protected far beyond its importance for national economies. And, when dietary guidelines begin to consider what we eat, especially dairy and animal carcass, powerful industry lobbies put their machines into motion, vilifying nutrition panels, scientists, advisers, and journalists.

Discussions, negotiations, and agreements regarding climate change refer to fossil fuels almost exclusively, and there is no question that oil, natural gas, and especially coal, are major sources of carbon dioxide (CO2) and methane (CH4). At the same time, the lifecycle and supply chain of domesticated animals have been vastly underestimated as a source of GHGs.

Is what we eat politically too hot to handle? Or, maybe it is simpler than this and due to a basic conflict of interests. After all, how many of the world’s leaders and climate negotiators are willing to follow a plant-based diet? The immense demand for food animals and industrialization of food animal production are deeply intertwined, and accordingly, both are perceived as normal and inevitable.

Animal-based products are the preferred food for most of the world's populations, and efforts to control what others eat can be perceived as threatening. For many lower income countries, animal consumption is aspirational, so pushing for less animal carcass, cow's milk and chicken egg consumption, would make for a politically unpopular platform.

The point of de-legitimizing livestock over-consumption is not to divide the “good” people from the “bad people.” Rather, it is to recognize that what the majority once took as normal, or even “net beneficial,” has turned out to be “net detrimental” and needs to be re-conceived.

Most actions for mitigating climate chaos and slowing temperatures have relied on decreasing CO2 pollution over the long-term. A short-term solution to cut back short-lived GHGs by reducing animal consumption will permit appreciably greater time to implement long-term solutions of lowering CO2. This could cool the planet faster and cheaper, and help to avoid dangerous tipping points, than the current engrossment over CO2.

Replacing livestock products with better alternatives would be the best strategy for reversing alteration of the climate. This intervention would have quicker effects on GHG releases and the pace of temperature advance, than actions to replace fossil fuels with renewable energy.

Climate warming is caused not only by what humans do in terms of burning fossil fuels, but by what humans eat as well. Admittedly, GHG pollution is released as an outcome of all diets, but they are much higher with animal-based foods. Human animals need to halt and reverse the destructive footprint of animal-based agriculture. And, humans need to farm the land much better. Agricultural improvement endeavors should give attention to places with a "yield gap," so larger magnitudes of food can be grown on the same quantity of land.

There are umpteen intergovernmental agencies, non-governmental organizations (NGOs), social and environmental organizations working on reducing GHGs from the fossil fuel industry. Hopefully, this will lead to major reductions in CO2 and CH4 discharges from oil, coal and gas production much earlier than 2100. The 2014 UN Intergovernmental Panel on Climate Change (IPCC) Synthesis report warned that we must reduce fossil-base emissions to zero by 2100, or gamble with severe consequences.

Up to now, though, there are few international agencies or organizations working on reducing CO2, CH4, nitrous oxide (N2O), and other GHGs released from animal agriculture. Instead, livestock production is being actively promoted, and agricultural CO2 releases are set to double in 50 years.(71) Given opposite trajectories of fossil fuel and livestock industries, animal agriculture may well end up being much higher than 30 percent of GHG by 2050, and the leading contributor of GHGs by 2100.

Western countries consume the most animals, and their dietary preference for animal products is unsustainable. The consumption of animal flesh is steadily rising in countries such as China and India that once followed sustainable, vegetable-based diets to a large extent.(72) Only a few countries in the developed North are taking token steps at mitigation. To wit, UK dairy farmers have committed to making a 20 to 30 percent reduction of CO2, CH4, and N2O by 2020, based on 1990 levels.(73)

Even so, the US and other governments' policies are driving demand by encouraging the globalization of Western diets and consumption patterns through trade agreements, and by facilitating animal products at artificially low prices, via subsidies on livestock feed. The US alone spends $38 billion each year to subsidize cows raised for carcass and milk.

If humans bring down GHG pollution from livestock to a great extent, planetary heating could be curbed fairly quickly. By making the food system more efficient and by eating healthier food, humans can trim back GHG outflows from agriculture by up to 90 percent by 2030. That is the equivalent of removing all the cars in the world.(74)

Substantial global diminution in meat intake by 2050 could cut back agriculture related GHG discharges 50 percent (75), and as much as 80 percent, since producing 20 servings of vegetables causes less GHGs than one serving of cow carcass.(76) Lower demand for livestock products, combined with mitigation options in the agricultural sector, will lead to global agricultural non-CO2 releases of 2,519 CO2-e in 2055, which is an approximate halving of 1995 levels.(77)

Substituting food animal carcass with soy protein could bring down total human biomass appropriation in 2050 by 94 percent below 2000 levels, and greatly diminish other environmental impacts related to use of water, fertilizer, fossil fuel, and biocides. And curtailing animal products to 10 percent of the global human diet would enable future global populations to be fed on just the current area of agricultural lands.(78)

Personal action is consequential and everyday choices can lead to enormous improvement. The personal is political, and if individuals act with social responsibility in the present, the future can be a much brighter place for humans and nonhumans alike.