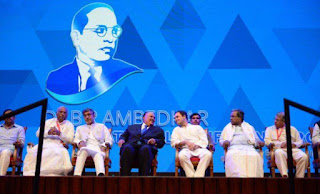 The conference, “Reclaiming Social Justice, Revisiting Ambedkar,” held from 21-23 July, 2017 in Banglauru, Karnataka, was historic in many ways. First, it was the first international conference that brought together hundreds of scholars from all across India and the world to focus on the life, thoughts and influence of one of the greatest minds of the 20th century – Dr. Bhim Rao Ambedkar (14th April 1891 to 6th December 1956). Although hardly known outside of India, B. R. Ambedkar is a distinguished leader in the history of South Asia, and a pivotal figure in the global quest for equity and freedom for the oppressed.

In an age of rapacious economic neoliberalism and rampant, machismo nationalism, Ambedkar's trenchant demand for equality, and his ardent call for freedom, equity and fraternity, have never been more relevant. Climate change in South Asia will necessitate cooperation with India's traditional rivals, China and Pakistan, and blindly following parochial, belligerent Hindu-based regimes may prove disastrous for hundreds of millions of climate refugees due to environmental disaster, land degradation, and uninhabitable conditions. India needs to remain democratic and cooperative with its neighbors to mitigate this unprecedented crisis and Dr. B. R. Ambedkar offers a way forward.

As the chief architect of India's Constitution, Dr. Ambedkar was a scholar par excellence, a philosopher, visionary, and emancipator of over 200 million 'Untouchables' or Dalits oppressed globally under hierarchical Hinduism. Born in an out-casted group considered ritually polluting to Hindus, Bhim Rao led a number of social movements to secure human rights for women, workers, the poor, and the depressed sections of society. Dr. Ambedkar is a towering symbol in the struggle for social justice globally, and stands as the South Asian equivalent to Sojourner Truth, Fredrick Douglas, W. E. B. Du Boise, Marcus H. Garvey, and Martin Luther King in the USA. The Indian Constitution is a testament to his vision of a civilized society with its numerous protections for the disadvantaged.

The Bengaluru Declaration issued at the conference was framed from input provided by the Dr. B.R. Ambedkar International Conference. The Declaration contains a broad set of recommendations to address a wide range of issues facing the poor. Although written for India, the 41 proposals could be adopted to improve the lives of Women across the globe, People of Color, minorities, and populations in the Global South.

Secondly, the conference offered a bold secular alternative to the ecocidal religiosity and genocidal militarism currently sweeping the world. To mitigate the impending effects of abrupt climate change, humans will need to become more secular, that is, learn to believe in ourselves, behave in a responsible way to others, and act as if we belong to a global community. Survival and adaptation to the deepening ecological crisis requires us to have unbiased perception, clear thinking, an open mind, and acute awareness of our local surroundings and conditions across the globe. At its core, to be secular is to maintain a naturalistic worldview in which belief in anything is always proportioned to the evidence available, and no leader exemplifies these values and qualities as much as Bhim Rao.

In a seminal undelivered speech to reformist Hindus, later published as the Annihilation of Caste, Dr. Ambedkar argued, “An ideal society should be mobile, should be full of channels for conveying a change taking place in one part to other parts. In an ideal society there should be many interests consciously communicated and shared. There should be varied and free points of contact with other modes of association. In other words there should be social endosmosis. This is fraternity, which is only another name for democracy. Democracy is not merely a form of Government. It is primarily a mode of associated living, of conjoint communicated experience. It is essentially an attitude of respect and reverence towards fellowmen (and women).”

Speaking on the opening night, Martin Luther King III presented a clear-headed, secular analysis of politics in India and the USA, and deconstructed the cunning appeal of cultural fundamentalism under which social intolerance is stroked. The son of the famous civil rights leader observed that the “Trump and Modi administrations have unleashed a ferocious animosity in both countries” and highlighted various mob and racially-based atrocities against females, African Americans, and Dalits. He concluded that both populist leaders, “have limited regard for the poor and the underprivileged.” Martin Luther King III's keynote speech linking the struggle against caste and race is an important contribution to Pan-Africanism and in theorizing the Global South, and should be read by activists worldwide.
The most anticipated speaker of the opening night also hinted to the dangers of religious ideology and narrow-minded nationalism. In his address to the packed auditorium, the current vice-president of India's Congress Party, Rahul Gandhi, warned against distortion of the truth and glorification the past to guide the present. Taking a principled, secular position on caste and religious issues, Rahul observed, “There have been good and bad sides to India, and we need to accept it and change it.”

Like King III, the grandson of the famous Indira Gandhi cited numerous examples of Hindu intolerance and their growing violence against Dalits and Muslims. Commenting on the systemic denial of caste-and religious based oppression, Rahul Gandhi stated, “The Modi government is trying to wipe out history and create a perfect India, thereby strangling the reality of Vermulas and Akhlaqs” - men who died as a result of religious bigotry.

Thirdly, the conference presented valuable insights into Ambedkar's global relevance as speakers connected his writings and activism on caste, religious and cultural oppression to the histories of enslavement, bonded labor, gender construction, labor, migration and other social issues. B. R. Ambedkar's legal prescriptions for women, the poor and disadvantaged, including safeguards for political representation, education and employment reservation was compared to affirmative action policies for women and minorities in the Caribbean, Nepal, Northern Ireland, Pacific Islands, Sri Lanka, South Africa, UK and USA.

The successful non-discriminatory safeguards implemented in Northern Ireland can be applied elsewhere, and similarly, lessons can be learned from the political shortcomings of Sri Lanka's affirmative action polices after the civil war. Moreover, the conference showed that Ambedkar's stringent opposition to female oppression under traditional culture and his prescriptions for women's equality are applicable worldwide.

Given the significance that Bhim Rao placed on female representation in all spheres, it was disappointing that the list of keynote speakers on the opening night did not contain a single female. The token female on the dais, a regional actress whose sole role was to dutifully introduce the eleven men on stage. Her marginality is symbolic of the far road that lies ahead for caste, race, sex and class-based inequality, but Ambedkar's guidance can help us achieve faster and safer passage to a more equitable and rewarding future.