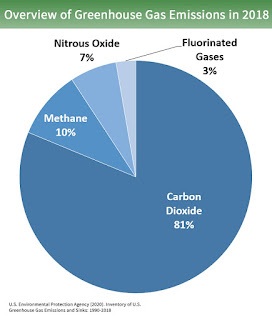 Animal agriculture has an enormous greenhouse gas (GHG) footprint, and is the second main source of climate-altering gases. In the EU, for instance, 29 percent of all consumption-derived GHG emissions are food related. This almost 1/3 figure does not include discharges from goods produced within the EU and exported.(50)

There is overwhelming evidence that animal-based diets cause greater planetary heating than plant-based foods, but there are differences in GHG production. The environmental costs per calorie of dairy, chickens, pigs, and eggs are strikingly lower than the impacts of cows - the production of which requires 28, 11, 5, and 6 times the sum of land, irrigation water, GHG, and nitrogen, respectively, than the other livestock categories. On top of that, plant foods use two to six-fold lower land, GHG, and nitrogen than even those of the non-cow animal-derived calories.(51)

Greater trade liberalization, like NAFTA and the Trans-Pacific Partnership (TPP), will lead to higher economic benefits for some, and come at the expense of the poor, the environment and the climate if no other regulations and safeguards are put in place. In addition, mounting demand for agricultural goods will intensify the pressure on global water resources over the coming decades.(52)

Deforestation, mainly in Latin America, leads to remarkable amounts of additional carbon pollution due to trade liberalization. In the future, non-CO2 outflows will mostly shift to China due to comparative advantages in livestock production and rising demand for animal products in the region.(53)

Eliminating all CO2 pollution from the energy and transportation sectors is not enough to stop global warming. The Intergovernmental Panel on Climate Change (IPCC) estimates that agriculture, land use, land-use modification, and forestry total around 23 percent of total manmade GHGs. This means that powerful GHGs from food and agriculture - mainly nitrous oxide (N2O) from agricultural soils, and methane (CH4) from livestock - will continue to cause planetary heating.(54)

Excessive nutrient flows cause eutrophication, worsens biodiversity loss, and exacerbates transformation of the climate. Eutrophication is the ecosystem's response to the addition of inorganic plant nutrients, especially phosphates and nitrates, through detergents, fertilizers, or sewage. One example, is the "bloom", or great increase, of phytoplankton in a water body. Negative environmental effects include hypoxia, the depletion of oxygen in the water, which may cause death to aquatic animals.

A 2013 Worldwatch Institute report estimated that global greenhouse gas pollution from the agricultural sector totaled 4.7 billion tons of carbon dioxide equivalent (CO₂e) in 2010, up 13 percent over 1990.(56) A 2006 report from the UN's Food and Agriculture Organization (FAO) showed that the global livestock sector is growing faster than any other agricultural sub-sector.

The world’s livestock population is expected to increase 76 percent by 2050, with a 65 percent surge in demand for cow's milk. And, remarkably, 80 percent of growth in the sector comes from industrial production systems. Currently, mirroring their fossil fuel releases, the world’s largest food animal consumers are China, EU, US and Brazil.(57)

The FAO's 2013 follow-up livestock report reiterated that livestock is the fastest growing agricultural sub-sector. The food agency's newer assessment was limited to direct farm discharges, but it still estimated that the animal food industry produce 14.5 percent of total anthropogenic climate-altering gases, which is in excess of all forms of transportation.(58)

In 2009, one of the World Bank's most distinguished environmental assessment experts, Dr. Robert Goodland, wrote a thought-provoking research paper estimating that the lifecycle and supply chain of animal-based meats, egg products, and dairy products accounted for at least 51 percent of manmade global GHGs.(59) One of the main reasons for the difference between the FAO and Goodland's GHG figures is that the FAO's 15 percent estimate is a partial assessment that only takes into account GHG discharges from the farming part of animal-based agriculture.

In fact, all of the lower 11 to 18 percent GHG estimates do not represent a full life-cycle GHG analysis of the animal food industry. These lower assessments end at the farm-gate and, therefore, exclude downstream GHGs from transportation, food processing, packaging, and sale of food animal products. Goodland's 51 percent estimate encompass these post-farm emissions, which are critical to assessing the total contributions of the animal food industry to global warming.

While the pathways between anthropogenic climate-altering gases and planetary heating are complex, and emissions are not equivalent to warming, there is still a strong correlation between livestock GHG releases and planetary heating. After energy production, animal-based agribusiness is the second, and possibly the main source of manmade climate warming pollution. The evidence for this is presented in Parts II and III of the book, Meat Climate Change.

In contrast, if we limit human activity and livestock production in the tropical forests of the world, this could play a valuable role in helping to curb the rise in carbon dioxide, methane, and nitrous oxide in the atmosphere. Preventing further losses of carbon from our tropical forests must remain a high priority.