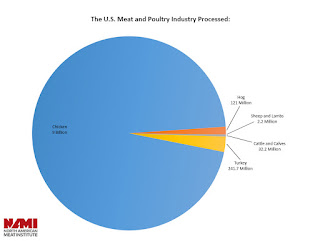 The agriculture sector is responsible for at least 22 percent of total global manmade greenhouse gas (GHG) pollution, 80 percent of which comes from livestock production.(60) Despite the oversized footprint, animal products account for only one-third of global human protein consumption.

Eating local food makes environmental sense when we buy seasonal fruit and vegetables from local farmers. But the tendency is to overemphasize food miles and underemphasize other impacts. There is no support for claims that local food is universally superior to non-local food in terms of its impact on the climate or the health of consumers.(61)

On average, transport accounts for just 11 percent of the GHG pollution caused by the food industry. So beans and pulses shipped from the other side of the world can cause far lower impacts than locally produced animal carcass, cow's milk, and chicken eggs. In the UK, GHG releases per item of food would probably be greater under self-sufficiency than under the current food system.

There are many factors that add up to making animal-based agribusiness one of the largest GHG emitter, and driver of deforestation and ocean acidification. In essence, the sector is a major component of all three major sources of GHGs – carbon dioxide (CO2), methane (CH4), and nitrous oxide (N2O). Both CH4 and N2O are especially dangerous because they are potent shorter-lived climate forcers that cause accelerated heating. These gases can push the climate to dangerous thresholds, or tipping points, for habitability.

The GHGs generated from a full life cycle of animal products adds up to an extraordinary volume of climate-altering gases. And, since livestock production is the main cause of deforestation, and thereby a reduction of earth's CO2 sequestration capacity, the sector's impact is far greater than its direct releases of GHGs.

This article argues that animal-based agribusiness is responsible for at least 30 percent of all GHGs. For example, in regards to CO2 releases, the food animal sector consumes most of the world’s grain and water, and produces the most waste, and is the main cause of the 26 percent that the United Nations Environment Programme (UNEP) 2014 Emissions Gap Report attributed to agriculture (11 percent), forestry (11 percent) and waste (4 percent).(62)

In addition, the livestock sector adds some part of the 39 percent of CO2 that UNEP attributed to industry (18 percent), transport (13 percent), and buildings (8 percent). In addition, there are CO2 releases from respiration, pollution, illness, and other aspects of the lifecycle of animals and their by-products.

For methane (CH4) discharges, livestock waste and digestive process are a major part of UNEP's 2014 estimate of 16 percent of the total manmade GHGs attributed to this gas. Methane is released from livestock production and fracking by the fossil fuel industry. And, in regards to nitrous oxide (N2O), the fertilizer used for animal feed is the main source of UNEP's 2014 estimate of 6 percent attributable to this gas.

Most of the food animal sector's CH4 and N2O outflows come from manure and fertilizers used to produce feed for the animals. In addition, CH4 is produced from enteric fermentation, a digestive process that causes animals to release methane by exhaling, belching, or excreting gas.

Animal products, both flesh and cow's milk, require extra resources and cause additional GHG pollution compared to plant-based alternatives. Animal production entails colossal energy losses since only 4 percent of crops grown for livestock turn into edible carcass.(63) And 1 kg (2.2 lb) of animal protein requires 6 Kg (13.2 lb) of plant protein.(64) In a comparison of GHGs, protein from cows generates 40 times the global warming of beans, and 10 times that of chickens.(65)

Nitrous oxide from fields and methane from livestock are projected to rise from 7.1 gigatonnes of CO2 equivalent (CO2e) in 2000 to 13 GTCO2e in 2070. This is greater than all human activities combined can safely produce without exceeding 2°C of planetary heating. And, land use modifications and the carbon footprint from animal-feed were not even incorporated in these calculations. So dietary transformations are crucial for meeting the 2°C target.(67)

Both CH4 and N2O are rising faster than CO2, and livestock is a main source for each potent GHG. Global agricultural non-CO2 releases will climb significantly until 2055 if food energy consumption and food preferences remain constant at the level of 1995. Non-CO2 GHGs will climb quicker with enhanced incomes, due to its link to greater food energy consumption and dietary preferences towards higher value foods, like animal flesh and cow's milk.(68)

Yet, if the demand for livestock products is reduced by 25 percent each decade from 2015 to 2055, this will lead to lower non-CO2 emissions even compared to 1995. Notably, reduced animal consumption was determined to be of greater effectiveness than technological mitigation options.

Over the past 50 years, the global food system has become heavily dependent on cheap water and energy, nitrate fertilizers, chemical herbicides, pharmaceutical drugs, and so on. At the same time, production, trade, and processing are progressively being controlled by a smaller handful of transnational food corporations (TFCs).

In a global corporate-controlled food system, governments and regulations are co-opted, and profits come before people and planet. The industry is the recipient of massive state subsidies and support and has vast influence over media, national and international agencies.

From local to global, livestock is one of the top contributors of serious environmental problems.(69) Despite this, there are few cases of the industry being held responsible for any of the problems it creates. Case in point, the USDA estimates that 89 percent of US cow carcass ground into patties contains traces of the deadly E. coli strain.(70) Yet, the animal-based agribusinesses are not held accountable for illness or treatment for the life-threatening diseases they cause.

Alarmingly, many of the world’s recent pollution problems and health pandemics have stemmed from corporate-controlled factory farms. As a ramification of livestock production, there have been decades of deforestation, land degradation, biodiversity loss and extinction, rural conflict and displacement, herbicide and waste pollution, water shortage, air pollution, dead zones, chronic diseases, global warming, and so on.

In spite of its multiple hazards, uncertainties over GHGs from animal-based agribusiness relates to the fact that while most of fossil fuel emissions are measured and accounted for, this is not the case with the livestock sector. And while eating tofu dogs will not correct everything that is wrong with the atmosphere and planet, ignoring livestock's GHG pollution and effects will make a monstrous problem much worse.