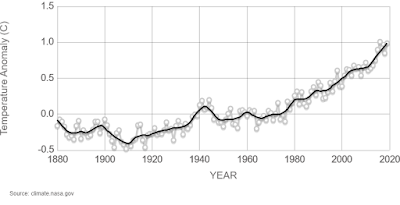 As the 2021 year begins, we review some important climate developments last year. First of all, 2020 tied 2016 for the hottest year on record globally. Second, 2020 continues a rapid heating trend as the last seven years have been the warmest in 150 years, and it concludes the warmest decade on record.

Average global temperatures in 2020 were 1 degree Celsius (about 2 degrees Fahrenheit) warmer than in the 30-year average between 1951 and 1980. Since 1980, warming has averaged around 0.2 degree C (0.32 degrees F) per decade. NASA Global Climate Change's Vital Signs of the Planet report that CO2 level is now 415 ppm, the Arctic ice minimum loss is 13.1 percent per decade, the ice sheets are losing 428 billion metric tons per year, and sea level is raising at 3.3 millimeters per year.

The changing climate is contributing to stronger hurricanes, larger and more destructive wildfires, and heavier rainfall that can cause flooding. Rising temperatures are also causing loss of sea ice and ice sheet mass, sea level rise, longer and more intense heat waves, and shifts in plant and animal habitats.

There were record fires in Australia and California, and severe drought in central South America and the American Southwest. Notably, 2020 was a La Nina year, with cooler temperatures in the vast Pacific Ocean. Yet, Typhoon Goni made landfall in the Philippines as the strongest tropical cyclone in history with sustained winds of 195 mph.

Europe and Asia had their hottest years on record, while South America and the Caribbean had their second-hottest. Europe had its warmest year ever in 2020, with heat waves lasting into September. The world’s oceans had their third warmest year. The Arctic and Siberia were among the hottest regions, around 6 degrees C warmer than the mid-20th century average. In South American, warming and drought resulted in fires across the vast Pantanal wetland.

According to NOAA, the US experienced $95 billion in climate disaster damages, with major disasters like the western wildfires, a record-breaking hurricane season and the mid-summer Midwest derecho that caused extensive damage. There were 22 weather and climate disasters in 2020 that cost over $1 billion in damages, surpassing the annual record of 16 billion-dollar disasters in 2017. The Atlantic Basin produced 30 named storms, with 13 of those becoming hurricanes. This topped 2005, which previously had the most storms in a season, 28. And, a record-breaking 12 named storms made a US landfall in 2020. Six of the US landfalls were from hurricanes - Hanna, Isaias, Laura, Sally, Delta and Zeta - far above the average of one to two hurricane landfalls per year.

As the 2020 year ends, some of the changes scientists are exploring include the weird fact that nights are warming faster than days, and how climate change is harming children's diets. Global warming is faster than evolution, and is making baby sharks smaller, undernourished and exhausted. Also, researchers found that global warming has profoundly transformed Arctic in just 15 years, the urban heat-island effect is turning cities into ovens, and that the warming already baked in will blow pass climate goals.

Although the political climate improved in the US at the end of the year, there has been decades of climate denial and limited action. This polluting legacy means that the new administration's climate policies may fall well short of what is needed to slow down abrupt climate change in 2021 and beyond.