'Race' and 'Whiteness' in Academia 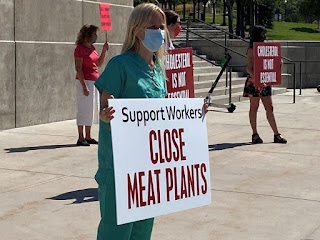 Although it is not readily apparent, discrimination against “minorities” is relevant to critical animal studies, and there are many ways in which “race” and “whiteness” intersect in the field. I saw this first-hand one summer when I attended a protest at a factory farm in Los Angeles. A deep racial division was evident at the demonstration, as most of the animal advocates outside the gates were middle-class European Americans, while the majority of workers inside the slaughterhouse were disadvantaged Latinas/os, African Americans, and Asians. Horrified by the stench of the place, I became even more aghast when the European American activists started calling workers “murderers.” And, when I queried the protesters outside if their pets were plant-based, some grew defensive, arguing that dogs and cats are natural carnivores and have to eat flesh. Ironically, cognitive dissonance allowed European American vegans to scream “murderer” at marginalized meat plant workers while continuing to support factory farms by buying animal flesh for their own pets.

Interestingly, the COVID-19 pandemic presents an opportunity to bridge this divide between activists and workers. Since the pandemic began, tens of thousands of “minority” and immigrant meat plant employees have become infected with the virus while working on animal slaughtering and disassembly lines. Deemed as “essential workers,” over a hundred meat plant employees have died from COVID-19. As a result, marginalized workers, their families and unions are calling for the closure of meat plants, along with doctors and health advocates. Animal advocates can help by campaigning alongside factory farm workers in resisting the livestock industry. The intersection of “race,” workers in meat plants, and the pandemic, is an important one for critical animal scholars to explore.

The are other ways in which “race” and “whiteness” intersect with critical animal studies. Educational institutions are not insulated from the effects of structural racism and the power of “whiteness” operating within the larger society. Universities and academic discourses reflect Eurocentrism and fortify structural racism, and scholars should examine how these larger social forces shape our disciplines. Despite claims of scientific objectivity and unbiased inquiry, there are several critical questions that remain largely unexplored in sociology and other disciplines.

For instance, why is there a lack of ethnic diversity in academia, generally, and more particularly, in our field? How does the lack of ethnic diversity in departments, in the academic literature, and in the use of citations, serve to reinforce Eurocentrism in our discipline? What are the consequences for a field of inquiry that is dominated by people with European heritage? Whose voices are included in the standard curriculum and knowledge base, which ones are excluded, and who decides? How do European ethnicity and cultural capital become entrenched as part of the discipline? And, how do European heritage and privilege bear upon the framing of research, the issues that are explored, the inclusion and exclusion of various voices, factors, social contexts, and so on?

There are other theoretical and material issues around “race” and “whiteness” that lack elaboration in critical animal studies. For instance, how does higher consumption of animal-based protein intersect with claims of Eurocentric supremacy and countries with majority European populations? How are over-consumption behaviors, and massive carbon footprints among a small middle-class in the Global North, subsidized by the impoverished masses in the Global South? How does the Western framing of individual “rights” for nonhuman animals conflict and contradict Indigenous notions of the “interconnectedness” of species? How are issues of representation, consent and objectification in the graphic imagery of animals and nature from the Global South, negotiated or ignored in animal studies and by nonhuman animal advocates and environmental organizations in the Global North? How do “conservation” campaigns in the Global North lead to corruption and dispossession in the Global South? And how does the promotion of ecotourism in the Global South for Westerners lead to trafficking, male violence and other problems for local women?

Although important first steps, the deconstruction of “race” and “whiteness” in our field will have limited outcomes if they are not accompanied by a decentering of Eurocentric theory and theorists, along with a centering of the work of socially defined “non-whites” — Indigenous, African American, Latina/o, Asian, and other. It is the responsibility of departments and academic fields to decenter Eurocentrism and increase ethnic diversity among scholars, scholarship, and the curriculum. Objectivity and transparency also oblige individual scholars to acknowledge ethnic privileges and to discuss how racial advantages may have influenced their career and research choices.

It is equally important for Western scholars to examine how their theoretical framing reflects perspectives in the Global North, and how these may differ from those of “minority” scholars and theories emanating from the Global South. Addressing the social influence of “race” and “whiteness” in our personal lives and careers is an important part of the process of deconstructing and decentering “whiteness” in our own scholarship, and in transforming the discipline in which we operate. The racist violence against Jacob Blake, George Floyd, Breonna Taylor, Rayshard Brooks, Elijah McClain, and the deaths of hundreds of “minority” meat plant workers from COVID-19, should inspire academics and their departments to do more in the cause of social justice for human and nonhuman animals alike.

About The Author
Dr. Moses Seenarine is the father of Jad and longterm ethical vegan. Seenarine immigrated with his family from South America to the USA in the late 1970s, and he is among the first generation to be college educated. His books include Meat Climate Change: The 2nd Leading Cause of Global Warming (2016); and Cyborgs Versus the Earth Goddess: Men’s Domestication of Women and Animals, and Female Resistance (2017). Seenarine has written dozens of articles on women, race, caste, migration, the environment, animals, and climate change. His work has been cited by the FAO, UNESCO, Human Rights Watch, Anti-Slavery International, the Institute for the Study of Labor, World Council of Churches, and many others.
at October 27, 2020