The First Domestication Was Feminist 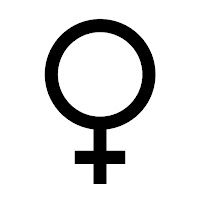 [Excerpt from Cyborgs Versus the Earth Goddess: Men’s Domestication of Women and Animals and Female Resistance (forthcoming, 2017) by Moses Seenarine, Ed.D]

The Great Apes
The subduing of mammalian males by females is an extensive and ongoing process in numerous species across the Globe. The first domestication realized among the great apes family in the primate order was the taming of sperm-producers by egg-producers. Even though balance between the sexes fluctuates, females wield great power in sex-selection.

Female reproductive achievement is limited by resource availability and acquisition. In contrast, male reproductive success is limited by access to mates and the number of fertilizations, and may therefore be more variable. Phallic apes have to obtain young-bearers' approval, who may have a preference for younger mates. So power relations among social primates are situational and constantly changing.

Primates are characterized by refined development of the hands and feet, a shortened snout, an ample brain, as well as an increased reliance on stereoscopic vision at the expense of smell, the dominant sensory system in most mammals.1 Many primates have specializations that enable them to exploit particular foods, such as fruit, leaves, gum or insects.2

The great apes or Hominidae are sizable, tailless primates, with the smallest living species being the bonobo at 60 to 90 pounds (30 to 40 kg) in weight, and the largest being the eastern gorillas, with males weighing 300 to 400 pounds (140 to 180 kg). The Hominidae family include seven species in four genera. One genus is Pongo consisting of the Bornean and Sumatran orangutan. Another is Gorilla, with the eastern and western gorilla.

A third genus is Pan comprising of the common chimpanzee and the bonobo. And finally, there is Homo, with human and near-human ancestors and relatives, like the Neanderthals. Fruit is the preferred food among all with the exception of human groups. Human teeth and jaws are markedly smaller for their size than those of other apes, which may be an adaptation to eating cooked food.3 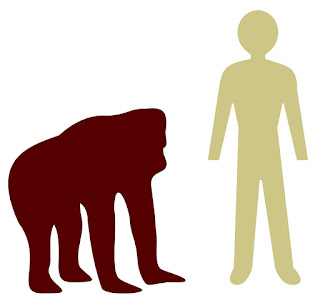 Similar to the male bias held by mainstream anthropologists, primate researchers are male-centric, and their work has focused on the role of phallic individuals vying for leadership of groups. Often viewed as more passive, egg-producing apes' manipulation of sex selection and other aspects of power are frequently understated and misinterpreted in primate studies.

The great apes have varying degrees of female-centered involvement in their cultures, from solitary orangutan mothers who avoid contact with males to female-led bonobo clans of over 100 individuals. Resident orangutan females live in defined home ranges that overlap with those of other adult egg-producers, who may be their immediate relatives. Females tend to settle in home ranges that overlap with their mothers,4 and so live mostly within a gynocentric grouping.

The notion of phallic-dominated gorillas with a lone silverback defending a group of egg-producers is problematic since this leads to increased sexual insecurity for sperm-producers. There are several advantages for silverbacks to follow the wishes of female gorillas, for example, food and reproductive security. 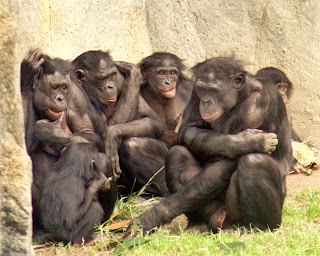 Pan: Bonobo
The most successful first-domestication among the great apes was that of bobono sperm-producers by egg-producers. This taming can probably be traced to the split between the two Pans, around one million BP. In contrast to chimpanzees, bonobos are relatively egalitarian and nonviolent. They are not phallic-dominated but instead display a mix of gynocentrism and sexually receptive behavior.

Sharing 98.5 percent of the same DNA as humans, it is not surprising that bonobos possess very human-like qualities. They embody a profound intelligence and emotional capacity. Bonobos have picked up on many facets of human culture through simple observation, and have learned how to communicate in human languages, use tools, and play music.5

Egg-producing bonobos frequently form coalitions even though they are generally with non-relatives. All-female coalitions of two or more individuals form spontaneously to attack males, usually after sperm-producers behaved aggressively towards one or more bonobo female.

Bonding enables bonobo females to dominate most of the males. Although male bonobos are individually stronger, they cannot stand alone against a united group of egg-producers. One researcher concludes, “coalitions in female bonobos might have evolved as a counter strategy against male harassment.”6

Interestingly, bonobos have highly individualized facial features, as humans do. So like us, one individual may look significantly different from another bonobo. This adaption facilitated visual facial recognition in social interaction.

Bonobos can live in close-knit social groups of a hundred individuals or more. During the day, the group break into smaller groups to forage in different areas, but the whole clan sleeps together at night. The ancestors of humans might have adopted the same foraging and sleeping behavior. And they may have occupied temporary retreats, or settlements, for extensive periods of time. So human settlements, or what is commonly considered as 'domestication,' is much older than 12,000 years.

Between bonobo groups, social mingling may occur, in which members of different communities have sex and groom each other. This behavior is unheard of among common chimpanzees. While social hierarchies do exist, rank plays a less prominent role than in other primate societies. Primatologist Frans de Waal thinks that bonobos are capable of altruism, compassion, empathy, kindness, patience, and sensitivity. He describes "bonobo society" as a "gynecocracy."7

Females have a higher social status in bonobo society than the other great apes. Aggressive encounters between females and male bonobos are rare, and sperm-producers are tolerant of infants and juveniles. Bonobos carry and nurse their young for four years and give birth every 4.6 years. Akin to the other great apes, bonobo mothers assume the entirety of parental care. 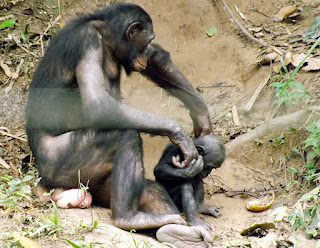 (Image: A bonobo mother and infant at Lola Ya Bonobo sanctuary in Kinshasa, DRC. - Christina Bergey)

A male bonobo derives status from the social position of his mother, similar to chimpanzees, and hanging out with mom can boost a sperm-producer's chances of getting intimate with a fertile female.8 The mother–son bond often stays strong and continues throughout life.9

Compared to chimps, bonobos show more sexual behavior in a greater variety of relationships. Bonobos frequently have sex, sometimes to help prevent and resolve conflicts. Bonobos are the only non-human animal to have been observed engaging in tongue kissing, and oral sex. Bonobos and humans are the only primates that engage in face-to-face genital sex.10

Bonobos do not form permanent monogamous sexual relationships with individual partners. They also do not discriminate in their sexual behavior by sex or age either. When bonobos come upon a new food source or feeding ground, the increased excitement will usually lead to communal sexual activity, presumably decreasing tension and encouraging peaceful feeding.11

Female bonobos engage in mutual genital behavior, possibly to bond socially and form a female nucleus of bonobo society. Egg-producers rub their clitorises together rapidly for ten to twenty seconds, and this behavior, "which may be repeated in rapid succession, is usually accompanied by grinding, shrieking, and clitoral engorgement."12 Adolescent females often leave their native community to join another group. Sexual bonding with other egg-producers establishes these new females as members of the group.

Bonobos' diet is for the most part vegetarian and sustainable. Foraging in small groups, bonobos feast primarily on fruit, but they also eat leaves, flowers, bark, stems, roots, insect larvae, worms, crustaceans, honey, eggs, and soil. The female-centered nature of bonobo and other primate societies show that male domination among humans is an anomaly among primates, and that it can be changed.

1Most primates have opposable thumbs and some have prehensile tails. Many species are sexually dimorphic. Primates have slower rates of development than other similarly sized mammals and reach maturity later, but have longer lifespans. Most primates live in tropical or subtropical regions of the Americas, Africa and Asia. They range in size from the mouse lemur, which weighs only 30 g (1 oz), to the eastern gorilla, weighing over 200 kg (440 lb).
2K Strier. 2007. Primate Behavioral Ecology (3rd ed.). Allyn & Bacon.
3Richard Wrangham. 2007. "Chapter 12: The Cooking Enigma". In C Pasternak. What Makes Us Human? Oxford: Oneworld Press
4EA Fox. 2002. "Female tactics to reduce sexual harassment in the Sumatran orangutan (Pongo pygmaeus abelii)". Behav Ecol Sociobiol 52 (2): 93–101.
5To 'ape' someone is to copy them. This points to how similar apes are to humans
6N Tokuyama & T Furuichi. 2016. "Do friends help each other? Patterns of female coalition formation in wild bonobos at Wamba." Animal Behaviour, 119:27–35 Sep
7F de Waal & F Lanting. 1997. Bonobo: The Forgotten Ape. U of California P.
8Martin Surbeck et al. 2010. "Mothers matter! Maternal support, dominance status and mating success in male bonobos (Pan paniscus)." Proceedings of the Royal Society B, Sep 1.
9Orcas, hyneas and other creatures also share strong mother-son bonds.
10Susan Block. 2014. The Bonobo Way: The Evolution of Peace Through Pleasure. Gardner & Daugh
11F de Waal. 1995. "Bonobo Sex and Society." Scientific Am 272 (3): 58–64. Mar