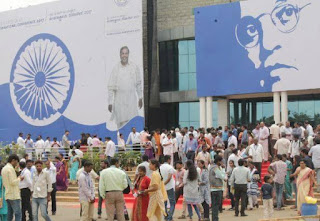 The country's economic growth is lauded by the ruling class, but is India's growth rate sustainable and equitable? What is the cost of decades of growth in terms of environmental degradation and social exclusion? India is portrayed as one of the world's top greenhouse gas polluters, but India’s extended period of economic growth is driving energy consumption, not necessarily its people.

Economic growth has remained positive since the mid-1970s and has hovered above five percent since the 1990s. Exports grew from $59 million in 1958 to over $30 billion in 2013, while food grain production rose from 51 million tonnes in 1950 to 257 million tonnes in 2012. Widespread belief in a raising GDP is viewed as a solution for all India’s social and political problems, and the growth rate is the only indicator of progress to which all Indian politicians pay homage. But there is an annual negative balance of trade of $13 billion, and total external debt of $470 billion.

The youth unemployment rate hovers around 13 percent officially, but the actual figure may be much higher. The Rangarajan study estimated that 363 million, or close to 30 percent of India’s 1.2 billion people lived in poverty in 2011-12. The study considers people living on less than Rs 32 a day in rural areas and Rs 47 a day in urban areas as poor. A vast majority of the poor come from Dalit and other disadvantaged communities.

The median Indian age is under 27 years, slowly raising from its low of 19 years in the 1970s. It is expected that, in 2020, the average age of an Indian will be 29 years, compared to 37 for China and 48 for Japan. The population growth rate is falling, and the pace of the decline has increased in the last few decades. The first decade of the new millennium saw fewer people added to India’s population than in the previous decade.

Women are the main reason for this decrease in growth rate. Indian women are having fewer children, and they are choosing to stop having kids early, so the mean age at childbirth is falling. The average fertility is 2.3 children, well down from 5.9 births per female in 1951, and is expected to further decline to the replacement rate of 2.1 by 2025. The rural fertility figure is 2.5, and in urban areas it is 1.8, close to the European Union’s 1.6. The urban population is around a third of the total, around 400 million people. The number of female births for every male birth in India is very low and just above that of China, Armenia and Azerbaijan. The sex ratio was 944 females for 1000 males in 2016, but this disparity should start to improve by 2020, when male and female child mortality is expected to be similar.

While the tremendous decline in fertility rate means that India does not represent a population bomb, there is a significant bump ahead due to demographic momentum that can still lead to resource problems and ecological crisis. Indians already represent a fifth of the world's humans, totaling over 1.3 billion in 2016, so the current slight value above the replacement rate translates into hundreds of millions of people in the coming decades. According to a 2017 United Nations' report, India will overtake China to become the world's most populous country within the next seven years. And, India's population will continue to grow until 2061 to over 1.7 billion people, by which time China's numbers is expected to decline to 1.2 billion.

In 2012, India had the tenth-largest economy in the world but was the fourth-largest energy consumer, trailing only the United States, China, and Russia. Primary energy consumption more than doubled between 1990 and 2011. India was the fourth largest consumer of oil and petroleum products in the world in 2011, after the United States, China, and Japan. India relies heavily on imported crude oil, mostly from the Middle East, and became the world's sixth-largest liquefied natural gas importer in 2011.

India's power capacity increased from 1,323 MW in 1947 to 240,000 MW in 2013. Coal is India's primary source of energy; the power sector accounts for more than 70 percent of coal consumption. India's dependence on imported energy resources and its inconsistent energy sector reform may make it difficult to satisfy rising demand. Because of insufficient fuel supply, the country suffers from a shortage of electricity generation, leading to rolling blackouts.

Due primarily to religious restrictions, vegetarianism is widespread in India, but very few Indians follow a plant-based diet in which all animal products are avoided. Milk and other dairy products are avidly consumed across a large portion of the country. There are high levels of meat consumption in Indian states such as Goa, Mizoram, Meghalaya and Kerala. In Bengal, even Brahmins, whose dietary restrictions are pronounced, are allowed to eat fish.

India is the largest milk producer in the world by a good margin, having recently surpassed the entire European Union, and Pakistan ranks fourth. Milk is India’s leading agricultural commodity, produced on some 75 million dairy farms, most of which are quite small. Urban dwellers, being wealthier on average, tend to drink more milk than rural dwellers. Ghee, or clarified butter, is an essential component of many Indian dishes.

To appease Hindu conservatives, 18 states have banned the slaughter of cattle. Three states require permits for the slaughter of cattle and seven states allow cattle to be killed. These tough restrictions did not stop India being a major player in world beef markets. According to the USDA India was the largest exporter of beef in 2014, ahead of Brazil and Australia. India exports mostly buffalo meat which largely fall outside of the cattle bans, plus the animals are needed to keep India's huge domestic dairy industry going. Beef earns India more export dollars than basmati rice. Further, the country's leather trade accounts for 13 percent of the world market.

Sales of beef, lamb and chicken in India have all increased steadily over the past six years and rising wealth is a big reason for the growth. India's disposable income has surged 95 percent since 2009, and meat consumption has nearly doubled over that time.

India occupies 2.4 percent of the world's land area but supports close to 20 percent of the world's population. India is already experiencing a warming climate and 13 of the country’s hottest 15 years on record has occurred since 2002. The former union environment minister, Jairam Ramesh, admitted that India is the most vulnerable country in the world to climate change. For one, no country in the world has the demographic expansion which India is currently experiencing.

Around 60 percent of India's agriculture is rain-fed and the number of rainy days have decreased which lessens ground water recharging. India is subjected to irregular monsoons, flooding, and higher temperatures. The Himalayan glaciers are receding which impacts the perennial rivers of north-India. And rising sea-levels will adversely affect millions of people living along the country's 7,500 km of coast line.

The reason India is so vulnerable to climate change is because it is a large country with many living in poverty, inadequate infrastructure, and lack of government planning to deal with complex weather systems. Climate change will exacerbate the risks faced by the country's poor, including storms, droughts and heat waves. Warming temperature trends over the last three decades have already been responsible for over 59,000 suicides throughout India.

High temperatures in the growing season reduce crop yields, putting economic pressure on India’s farmers. Crop losses could permeate throughout the economy, causing both farming and non-farming populations to face distress as food prices rise and agricultural labor demand falls. With no limit on global warming, about 30 percent of the region could see dangerous wet bulb temperatures above 31 degrees C (88 degrees F) on a regular basis within just a few decades.

By the end of the century, wide swaths of northern India, southern Pakistan and parts of Bangladesh may become so hot and humid it will be deadly just being outdoors. Such conditions would threaten up to a third of the 1.5 billion people living in these regions. Most of those at risk are poor farm workers, outdoor construction laborers, women and children.

The poor lack air conditioners, and up to 25 percent in of India’s population still has no access to electricity. In some areas that have been deforested for industry or agriculture, the disenfranchised may not even have very much shade. Women and girls from Dalit and other marginalised communities are disproportionately affected since they have to go outdoors to search for firewood, fetch water, wash clothes, and so on.

Floods and other natural disasters can affect affects crops, livestock, infrastructure, roads, electricity, communication links, and more. Abrupt climate change in South Asia may necessitate cooperation and fraternity with India's traditional rivals, China and Pakistan. And a belligerent Hindu raj posturing for votes may prove disastrous for tens of millions of climate refugees. India needs to remain democratic and collaborative with its neighbors to mitigate this unprecedented crisis.

The Indian diaspora will also be significantly impacted by climate change. A vast number of overseas Indians reside on islands and in countries below the sea level. Will India allow millions of climate migrants to return from overseas communities? Diaspora organizations should include climate change in their agenda and help communities in affected countries to become more climate resilient.