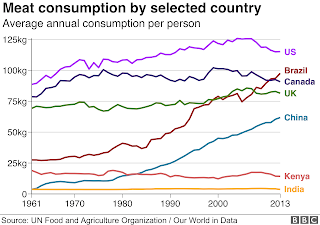 The social and structural factors of animal consumption are rarely looked at. Also, due to conflicts of interests, the world's leading food authorities cannot, and do not, question any of the aspects of structural demand they promote. The production of food animals is not simply a direct response to consumer demand, since production and intake are affected by (i) government subsidies; (ii) industry groups, such as the councils and trade associations for cows, pigs, chickens, etc.; (iii) national nutritional guidelines; (iv) schools and organizations; (v) advertising and popular culture; (vi) business and private interests; (vii) communities and traditions; and so on.

Indeed, political economists have long argued that the economic elite control consumer preferences through means of social, psychological, and cultural manipulation. Particularly, consumers are manipulated through the use of advertising.(639) And, curiously, the food animal industry' promotional messages are considered by the US Supreme Court as “government speech.”

The livestock industry is capable of manipulating food preferences because it is extremely powerful and consolidated. In the US alone, the sales of animal flesh was $186 billion in 2011, more than the GDP of Hungary or Ukraine. On top of this, according to the American Meat Institute, “Meat and poultry industry impacts firms in all 509 sectors of the U.S. Economy... (and) generates $864.2 billion annually to the U.S. economy, or roughly 6 percent of the entire GDP.”(640)

In 2015 alone, the cattle carcass industry spent $39 million of the government-created, checkoff program revenues on “consumer public relations,” “nutrition-influencer relations,” and countering “misinformation from anti-beef groups.” The industry calculated that the checkoff program resulted in Americans eating 11.3% more cow carcass. As a trade magazine boasted in 2013, “The beef industry has worked hard to create the love affair that Americans have with a big, juicy ribeye.”

The pig industry’s “The Other White Meat” tagline is the fifth-most recognized advertising slogan in the history of American marketing. And, it had the blessings of the USDA. After the campaign was launched in 1987, sales of pig carcass climbed 20% for five years.(641). Not to be outdone, one of the cattle industry’s websites boasts of their advertising clout, “In the minds of the many consumers hearing that question [‘What’s for dinner?’], a dominant answer has been planted: Beef. It’s what’s for dinner. Not just planted, in fact. Watered, nourished and cared for over the past two decades.”(642)

Generic advertising campaigns by livestock producers is augmented by promotions from food animal vendors, such as restaurants. McDonald’s is the largest cow carcass buyer in the US and many other countries. This transnational food corporation (TFC) spent $1.37 billion on advertising in 2011, and sold about seventy-five burgers per second each day, worldwide. The most frequent advertising spot on children’s Saturday morning television is McDonald’s, and the second is Burger King. Not surprisingly then, after Santa Claus, Ronald McDonald is the most recognized figure for American kids.

The industry also works hard at disassociating domesticated food animals from the products produced by animal-based TFCs. For instance, food animals and the conditions under which they live are rarely represented in flesh, egg, and milk advertising. Instead, the absent referents and actual subjects are objectified and hidden through the use of language and images centered on the indulgent aspects of food animals' preparation and consumption.

In contrast, there are no checkoff program for plant-based foods, or trade associations that represent all fruit, vegetable, bean, and lentil growers. Consequently, according to the US deputy secretary of agriculture, producers of fresh fruits and vegetables “have traditionally been under-represented in farm bill policy.”(ibid) Moreover, the few promotions that do encourage eating more vegetables operate with much smaller budgets than livestock campaigns. For instance, the "5 A Day for Better Health" promotion developed by the National Cancer Institute and the Produce for Better Health Foundation in 1999, had a budget of less than $3 million.

In effect, production generates consumption because livestock producers, processors, and marketers have cultural hegemony, that is, control over the values and beliefs of a culture. From this perspective, the structural power of the animal carcass industry is a major determinant of levels of animal consumption.

Cronon’s analysis of how the US animal carcass industry grew throughout the 19th Century by transforming American agriculture demonstrate that consumer habits are greatly influenced by powerful corporate interests.(643) Indeed, few economic institutions affect human communities and natural ecosystems in the modern capitalist world to a larger extent than livestock and feed commodity markets.

Diet can be viewed within a historically formulated understanding of a given social system. It is an evolutionary product of environmental conditions and of the basic forces, especially the social institutions and social relations, that effectively determine their use.(644) Variation in what people eat reflects substantive variation in status and power. Diet fundamentally characterize societies that are internally stratified into rich and poor, sick and healthy, developed and underdeveloped, overfed and undernourished.

According to McCracken, the creation of social distinctions, such as class, race, and occupation, is supported and authenticated through material objects.(647) Therefore, variation in consumptive patterns may be expected among individuals in different social categories. Differences in food consumption patterns may distinguish one social group from another and these consumption patterns may reproduce social differentiation.(648) These are some of the structural factors driving the overconsumption class.

Biological sex has a strong influence on animal consumption, as well. Gossard and York ascertained that women consume substantially less total carcass than men, 74 grams (2.6 oz) a day less.(649) What's more, females consume less cow carcass, almost 17 grams (0.6 oz) a day less, which is considered a “powerful” and masculine food.(650) Newspaper representations of men, food and health indicate a persistent adherence to hegemonic masculinities predicated on health-defeating diets, special occasion cooking of hearty meals, and a general distancing from the feminized realm of dieting. At the same time, men are constructed as naive and vulnerable when it comes to diet and health, while women are viewed as experts.(651)

Clearly, there are compelling structural factors operating to influence individual and group diet, and tremendous potential for mitigating demand through a transformation in values. However, there is a lack of information on policies and related social and psychological aspects for this transformation.