Factory Farming is Not a Climate Solution 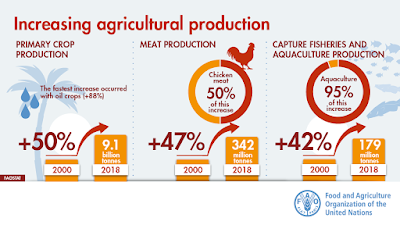 There are vast numbers of problems with animal-based agribusiness. When added up, the negative consequences of industrialized livestock production far outweigh any positives. Yet, the international food authority, the UN Food and Agriculture Organization (FAO) customary approach is to pursue well-tried, industrialized systems that, they argue, are essential to ‘‘maximize efficiency.’’

Avoidance of future environmental destruction the FAO's industry-friendly 'solutions' will create is seen as merely a matter of (i) improved surveillance, (ii) tighter regulations, (iii) further rigorous safety inspections, and (iv) a generally inflated bureaucracy. The fundamental, unchallenged, principle is that the desire to maximize financial profit is the driver of the whole food chain. This does not translate to broad-based recommendations that are 'climate-friendly' or environmentally 'sustainable'.(636)

In contrast, pet animals are considered as full subjects with names and personalities, worthy of affection and protection by several UN agencies. Factory farming involves intensive techniques on mostly female animals. The food animal industry is characterized by the use of cages, overcrowded sheds, and barren outdoor feedlots. Each creature is a mere production unit in intensive factories, where feeding is practiced on a massive scale.

Industrial animal agriculture involves the use of fast-growing or high-yield livestock breeds where the animals are subjected to painful production practices and prone to production-related diseases. Factory farming is energy-intensive, using concentrated feed and high mechanization. Similar to industrial feed production, factory farms have low labor requirements. The FAO 2013's recommendation for 30 percent mitigation of greenhouse gas (GHG) emissions, are not as effective as curtailing demand.

One review of global, regional and national levels of food's GHG outflows show that, in addition to technological mitigation, it will be necessary to shift consumption patterns, in particular away from diets rich in GHG-intensive animal-based and cow's milk products. This shift will be necessary not just in the developed North, but likewise, in the long term, in the developing world.(637)

Even if GHG discharges from food production were halved by 2050, and if 70 percent to 80 percent of the current forest carbon was preserved, global GHG pollution from other sectors still needed to peak before 2015. On top of that, total anthropogenic climate-altering gases will have to decrease 6.5 percent a year to limit planetary heating to 2˚C (3.6°F).(638)

The FAO 2013 report acknowledges that livestock's environmental problems "reflect weaknesses in institutions and policies." Yet, the international food agency remains completely silent on corporate governance and accountability. The UN authority only makes a token statement that safeguards should be in place to avoid the potential negative side-effect of efficiency gains.

Be that as it may, these 'safeguards' have done little in the past to prevent animal diseases, soil and water pollution, displacement, and so on. Repeatedly, safeguard language and criteria are used to justify expansion while they have little impact on deforestation, displacement, pollution, or the effects of large-scale expansion.

Given the difficulty of applying regulatory systems in the past, the likelihood of FAO's call for 'safeguards' being successfully enforced in the future is slim. The TFCs responsible for many of the existing problems have done little to deal with these problems.

Plus, the GHGs that will be generated in strengthening regulatory institutions and enforcing stricter policies are not part of FAO's calculations. Nor are the emissions released by cleanup efforts of the negative side-effects of efficiency taken into account. These outflows can dwarf all efficiency gains from this sector's emissions.