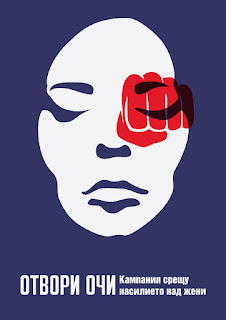 (Bulgarian DV Poster)
Excerpt from Cyborgs Versus the Earth Goddess: Men's Domestication of Women and Animals and Female Resistance by m seenarine (2017). Xpyr Press, 358 pages ISBN: 0692966005 ) http://amzn.to/2xyTkmh
Understanding statistics regarding phallic violence is complex. A lot of it is hidden, under-reported, under-counted, or simply not recorded.1 Nonetheless, close to 90 percent of violent crime and sexual violence are perpetuated by self-entitled cyborgs.

Physical aggression occurs in 1 in 3 teen dating relationships.2 A UNICEF report found 120 million girls worldwide, slightly more than 1 in 10, experienced forced intercourse or other coerced sexual acts by a male at some point in their lives.3 In the US, one in five high school girls report being physically or sexually violated by a dating partner.4

According to the US Surgeon General, domestic hostility by sperm-producers is the leading cause of injury to women. While the World's Health Organization (WHO) finds that 35 to 70 percent of women globally said they had experienced physical violence in their lifetime, mostly by an intimate partner.8 And, the US Department of Justice estimates around 85 percent of the victims of domestic violence are women. Lamentably, all categories of egg-producers suffer from men's domestic aggression, regardless of income, age, race, education, or belief system.9

As part of their subjugation of females, phallic partners with false privilege assault three million women and girls in the US each year. A woman in America is more likely to be assaulted, raped, or killed by an intimate partner than by any other type of assailant. Moreover, victimization by domestic violence is usually not a single event. If a woman is battered once, her risk of further maltreatment is high. And over time, a victim's abuse usually becomes not only more frequent, but more severe.

Similarly, there is an overlap between child beatings and female battering. Over 65 percent of men in the US who attack their partner also physically and sexually abuse the children. Child ill-treatment occurs in 30 to 60 percent of family violence cases that involve families with children. Exposure to fathers' abusing and domesticating their mother is the strongest risk factor for transmitting aggressive behavior from one generation to the next.10

In households with pets, women are more often the primary caretaker of the pet, which increases the human-animal bond. There is a strong link between men's mistreatment of animals and their abuse of human egg-producers. In the US, over 70 percent of female survivors own pets who were likewise beaten. Many victims do not leave a harmful situation because they worry their pets are also in danger.11

Battered women are more likely to remain in an abusive home or return to such an environment if they do not have a safe place for their pets. Between 18 and 48 percent of assaulted women have delayed their decision to leave their batterer or have returned to their abuser out of fear for the welfare of their pets or livestock.12

Phallic domesticating violence is a leading contributing factor to other problems including child neglect, drug and alcohol abuse, emotional problems, job loss, homelessness, and attempted suicide. The social and economic costs on women and society are enormous, but generally go uncounted and unrecognized.13

According to the US DOJ, between 1998 and 2002, of the almost 3.5 million violent crimes committed against family members, 50 percent were crimes against spouses.14 A woman is beaten every 15 seconds in the US by a man, and 35 percent of all emergency room calls are a result of domestic aggression. Each day, four women and three children die as a result of phallic abuse in the US alone.

Men's violence against females worldwide “persists at alarmingly high levels.” This conclusion was reached by a UN report that the Secretary General presented to the General Assembly, one day after International Women's Day on March 9, 2015.15

Although 125 countries criminalize domestic violence, the laws are not reliably enforced, and the economic impact alone is astronomical. One study found that cyborgs' domestic violence costs the global economy $4 trillion. The report states, "the costs of violence are high; the welfare cost of collective, interpersonal violence, harsh child discipline, intimate partner violence and sexual abuse are equivalent to around 11 percent of global GDP.”16

The report continues, “The cost of homicides are much larger than the cost of civil conflict. However, violence perpetrated in the home appears to be the most prevalent form of violence. Domestic abuse of women and children should no longer be regarded as a private matter but a public health concern.”

3UNICEF. 2014. “Hidden in Plain Sight: A Statistical Analysis of Violence against Children.”

Email ThisBlogThis!Share to TwitterShare to FacebookShare to Pinterest
Labels: Cyborgs vs the Earth Goddess, violence, women