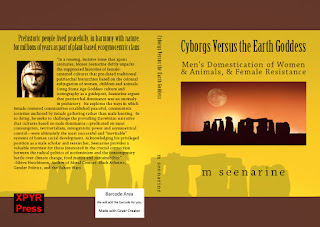 Cyborgs Versus the Earth Goddess: Men's Domestication of Women and Animals, and Female Resistance is now available from Amazon (http://amzn.to/2xyTkmh) and other booksellers. This book has a compelling and unusual story to tell.

For millions of years, early humans lived in gynocentric or female-centered cultures which revolved around the worship of Earth Goddesses. Female-led clans were ecological and managed the land sustainably throughout the Stone Age. What is more, numerous aspects of so-called human 'civilization' were developed by prehistoric females, thousands of years before men/cyborgs domesticated animals - from fire, fireplaces, cooking, food preservation, and storage, to dance, art, medicine, philosophy, language, stories, ritual, trade, settlement, pottery, textile, calendar, metal, and more.

The text includes engrossing details on specific Goddesses, such as the Goddess of animals, the Moon Goddess, the Triple Goddess, Sybils, and Oracles. The significance of hundreds of Woman/Goddess carvings found in Europe and Asia is considered, along with evidence of prehistoric women's cave art. There are vital discussions on gynocentric power, and female-centered family and culture. The importance of the Mother's gift economy is also explored, especially its influence on socialism and the capitalist backlash against feminism that resulted.

The 358 pages in divided into 28 chapters. The writing is eclectic, interweaving research on female prehistory, archaeology, anthropology, genetics, evolutionary biology, art, culture, myth, theology, and theory. Intersecting with insightful analysis on Stone Age females are fascinating discussions on diet and the historical relationship between human and non-human animals.

This unique book on the history of women and animals is loosely organized and includes a compelling narrative in each chapter, called ASIA's Journey about a group of climate refugees in the near future. Some of the key issues explored are the status of women during the Stone Age, the emergence of animal husbandry and male-centered civilization 10,000 years ago, the social construction of patriarchy during the Bronze Age, and the effects of male dominance into the present.

Seenarine shows that millennia after the intensive cultivation of crops, around 8,000 years ago, men harnessed animal power to gain the superior strength and speed of cyborgs. Horses were exploited by pastoral sperm-producers to conquer gynecological clans across Asia, Europe, and the Middle East. But unlike agriculture, the use of domesticates is unsustainable, and this practice has led to countless wars over land and water resources.

After taming animals, men subjugated females into property and used literacy and religion to reduce them to the status of animals. Correspondingly, the once mighty Earth Goddesses became the jealous consorts of kings and male sky gods. The cyborg domesticating mindset continues into the present where nonhuman animals and human females are stripped of agency and considered as objects freely available for phallic use. Seenarine argues that men's defeat of the Earth Goddess is the root of the present ecological and social crisis, and empowering women and animals are necessary for avoiding ecocide.

The study explores several important questions: What was the Paleo Diet? Were the Paleo diet and food security more influenced by female gatherers or by male hunters? Are men natural born killers driven to rape? How did Stone Age women deal with male aggression? How are female-centered cultures organized and maintained? Can female governance help to restore the balance with nature and heal our relationships with animals? Can an understanding of gynecology help to solve the massive problems of climate change and species extinction?

Importantly, the book examines resistance to patriarchal thinking and cyborg consciousness formulated by ecofeminists and others, and argues for a return to gynocentrism. There is little domestic violence in existing female-centered groups, and men live happier when women are in charge. What is more, the author suggests that adopting a Mother's gift economy can help end global poverty, inequity, and discrimination. In addition, learning about ancient gynecological perceptions and spirituality can help both women and men to live simpler and happier lives.